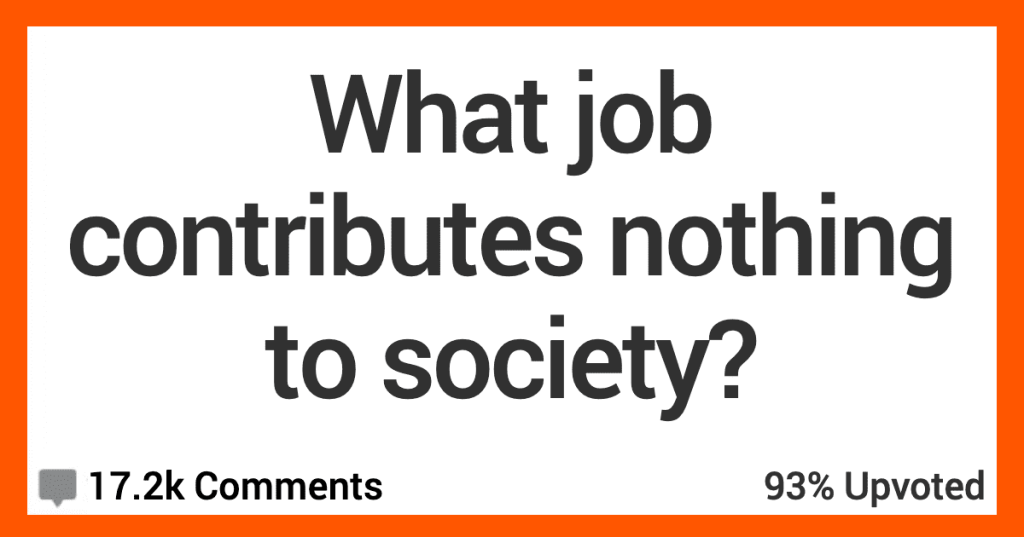 What Job Contributes Nothing to Society? People Shared Their Thoughts.

Oh, boy, this is gonna be fun…because you and I both know that there are a whole lot jobs out there that don’t contribute anything to society.

And people have strong opinions about this stuff!

So let’s see what AskReddit users had to say about this.

They drive up medical costs while simultaneously telling your doctor what you can’t have.

They make no contribution to your well-being and produce nothing of value.”

“Telemarketing. How they stay in business is beyond me.

No one I know picks up their phones for unknown numbers, and even my phone will warn me that they’re a “Spam Risk”.

In the off chance that anyone actually does pick up, the moment they realise it’s just someone trying to sell them something then they’ll immediately hang up. Who are they selling to???”

I felt so foolish to have been convinced it wasn’t “pyramid selling”. Yes. Yes it is.

Didn’t cost me a lot, thankfully, but the fact I tried to get others involved was shameful.”

“Mommy bloggers that put an uncomfortable amount of personal information about their kids on the internet.”

All they do is have your payments go into default, ruin your credit, and then pay creditkarma or something similar to do a little boost.

And you’re out $15k or more. They scam the already scammed.”

I really have never ever thought: “good grace this paparazzi took a pic of a celebrity doing their private stuff, truly gives insight of their interesting personal lives”.

They could all lose their jobs for all I care.”

“The people who write long winded articles with headlines that promise to reveal new info, spend the whole article recapping info that is common knowledge and end with we still don’t have any updates, but when we do, we’ll be sure to let you know.

The articles sole purpose is to get clicks from people googling “Winds of Winter Release date”.”

“The people that ‘raise awareness’ especially if they want us to fund some trip around the country to do it.

Dude, we already know cancer is a thing.”

“I’ve always thought people who film reaction videos contribute nothing to society. They use other people’s videos/audio/stories for content, making their job ridiculously easy.

Somehow they get views, but I wouldn’t consider watching someone react to something entertaining. It makes me feel like they think their opinion is more important than anyone else’s.”

Also, I sat next to a guy in an airport waiting area that appeared to be running a complete f**king scam. He was dressed nattily in a fitted blue suit, immaculate flat brim and track shoes and streaming a “Welcome to My Millionaire’s Get Rich Club” broadcast.

Dude spoke for 40 minutes straight without so much as a sip of water about how his investment secrets were going to make everyone wealthy beyond their wildest dreams. Man’s gotta work, right?”

I used to play professionally, and it was one of the most empty feelings I had ever experienced. And I won money. I’m not saying that as a failed professional. It was just empty and depressing.

I truly felt like my only contribution to society was taking advantage of drunk or bad gamblers, some of whom were gambling with money they could not afford to lose.”

The ones with the little rectangular signs at the entrance to public parking lots that have 2500 words on them in size 5 font, basically explaining that they can tow your car for any reason.

Then you work in the fact that every shady condo landlord or strip mall owner is in bed with these dirtbags, obviously getting a kickback off every car they call in.

Once they’ve got your car, you’re f**ked. You pay them (cash only, because obviously) because they’ve got your car. Think they towed you illegally? Neat, they’re going to charge you storage fees every day while you try to fight them, so you better be certain you’re going to win. And you don’t have a car in the meantime. An average person cannot risk it.

No legal business operation has a worse relationship with their “customers.” Every one of these places is staffed by the bitchiest teenager you’ve ever met in your life (somebody’s niece/nephew that is definitely being paid under the table) behind six inches of bulletproof glass and a reinforced steel door.

They know you’re going to be pissed, they’re openly f**king garbage human beings, but they’ve got your car and you have to give them money to get it back, so f**k you.

Last time I had to deal with one of these places, I got towed from my own apartment building, with my resident sticker shown. I called and asked them why they towed my car.

They said I was parked on the lines. I asked them to send me a photo (they’re legally required to provide one).

Why did I ask for a photo? Because the spot I was towed from–for parking on the lines–doesn’t have lines. The shameless f**king dirtbags still sent me the photo anyway, and just changed the reason to “we were contacted by the property owner and towed at his request, no reason is required.”

Oh, and the photo was timestamped 11:55 PM. Five minutes before midnight. So I had to pay for a day of storage fees. I bet the number of vehicles that get towed at 11:55 PM is about the same percentage as Steam users who are born on January 1.”