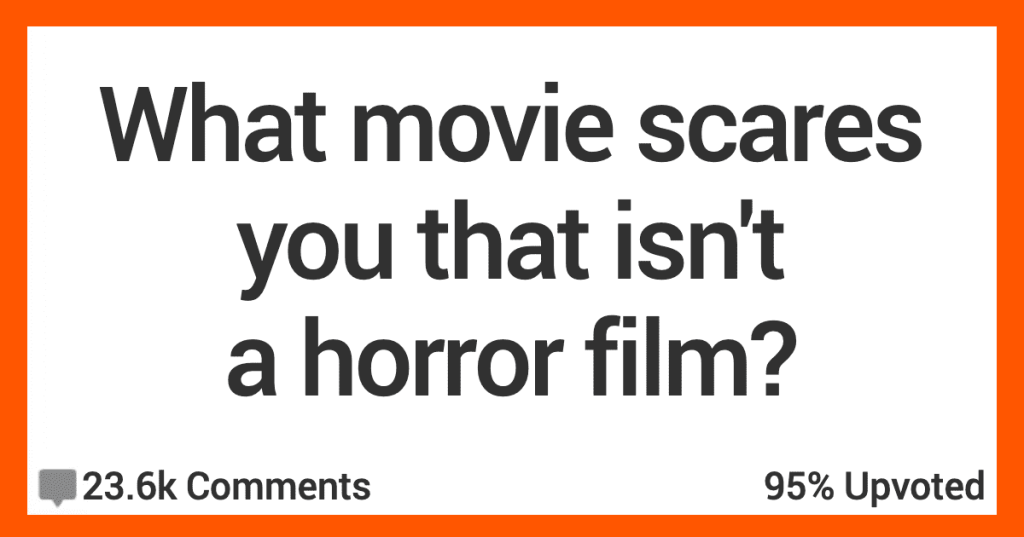 What Non-Horror Film Scares the Hell Out of You? Here’s What People Said.

There are a lot of movies out there that ARE NOT horror flicks that really scare the hell out of people.

The first time I saw Apocalypto?

Wooo, boy! That movie is terrifying and my heart was beating a million miles per hour!

Also, have you ever seen Mean Girls? Yikes…

Let’s hear from folks on AskReddit about non-horror movies that really scared them.

1. Look out for monkeys!

As a kid I used to have nightmares about those monkeys chasing me.”

“Ever watched Pinocchio as an adult?

That is effed up.

The scene with the boy turning into a donkey and losing his s**t over it is downright traumatic and not the kind of body horror one expects from a kid’s film!”

Saw it when I was 5. Had nightmares about the wheelers for years.”

“My Girl when Macaulay Culkin gets stung to d**th by bees.

Childhood me was scared of bees for quite a while.”

“The original Alice in Wonderland.

It terrified me as a kid that she couldn’t find her way home.

Nobody was really helping her, she was just stuck.”

“I know it was meant to be a comedy and all, but Mars Attacks.

Call it deep-seated child trauma from seeing it when I was too young.

Watching people get disintegrated into piles of bones gave me nightmares for weeks.”

The ab**e is f**king terrifying and I remember thinking, “who the f**k decided Roald Dahl’s stories are for kids?””

The scene where Sassy went over the waterfall terrified me so much that I did not finish the movie for another four years, even after repeatedly being told she was okay.”

Sure, seems like a harmless movie, but the scenes with the Child Catcher are super creepy.”

Not so much now, but as a child seeing a cartoon d** while getting dipped in acid was horrifying.”

“Terminator 2 when I was a kid.

The idea that the T-1000 could shape shift into anybody freaked me out.

How do I know that’s you mom and not an evil robot trying to k**l me?

“When I was a kid, I watched Cast Away with my family the day before my parents were about to leave for Australia for a business trip.

I was absolutely terrified and kept crying because I thought they were gonna end up like Tom Hanks.”

“In Ex Machina there is a scene where the robot girl peels off the artificial skin from her face revealing the machinery beneath.

For some reason I found it incredibly unnerving.”

“The older Charlie and the Chocolate Factory scarred me for life as a kid.

The fat kid getting stuck in the chocolate tube and then shot out like a rocket, Verruca Salt falling down the “bad egg” thing to the incinerators, the girl turning into a human blueberry and the mention of them “squeezing her out”.

The TV kid turned into airwaves and into a tiny version of himself, Slugworth, Charlie and Grandpa Joe almost getting k**led by the fans after drinking the fizzy drinks…. not to even mention the Oompa Loompas and their songs. I can’t even stomach to see it to this day.

The Johnny Depp version was a tiny bit better but not by much.”