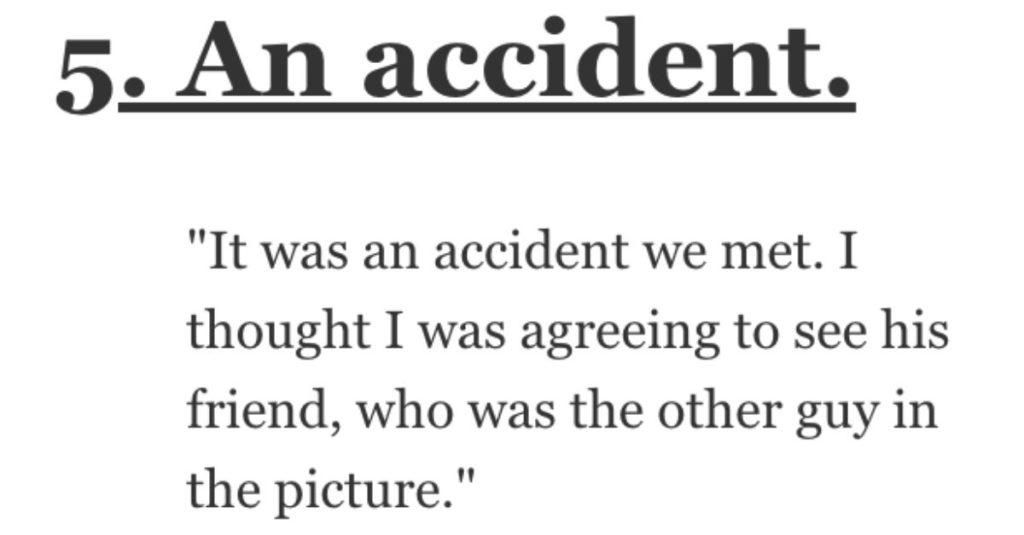 What Secret Can You Not Tell Your Partner? People Responded.

Have you ever had a secret eating you up inside so much that you just can’t deal with it?

Check out what folks on AskReddit had to say about this.

For years, I had been bothering my parents for my own gold necklace. Well, Gram had a little bit of money and she gave me the $300 for a gold necklace in her will. It was my pride and joy. I had it around my neck for 17 years before I met my wife. It was off my neck maybe three times in those 17 years.

My wife (then girlfriend) knew how much it meant to me and asked to wear it once. Well, it never came home. She had lost it somewhere or it had gotten stolen. I was distraught like crazy for three or four days while we turned our house upside down looking for it.

Inevitably, I gave up, but she was very bothered by it all. So, I decided to go to a pawn shop and buy the closest I could get to an exact duplicate and then I told her that I had found the necklace in the couch cushions. To this day, she thinks that I found my necklace from my grandmother, but this is actually version 2.”

“My partner doesn’t know how bad my mental health really is – she knows I’ve reached out for support but doesn’t know the extent of help I’m seeking.

I just can’t bring myself to say those words to her.”

“One time we had half a container of ice cream left. I had a craving.

I ate a bowl, then another. Then I decided to finish the tub to destroy the evidence. Then I realized she would notice that there was no ice cream left. So I went to the store, bought another tub, and then ate that one down to the same level.

This was a GALLON tub.”

“That my wife always screams, she just doesn’t seem to be able to talk at a normal level.

Feel like she should be selling fish at a market place…… Love her though.”

“It was an accident we met.

I thought I was agreeing to see his friend, who was the other guy in the picture.”

“That I wish she would find a career or pursue a degree so I don’t have to work 1000+ hours of OT a year so she can sit at home.”

“Sometimes I just sit in my car outside work or our apartment for 20-30 minutes because I need some time alone.

I have my mind full to the brim at work and rarely get time in the house alone.

Sometimes I just need it to be quiet and not have to pay attention to anything!”

“The reason I wasnt hungry that one day in Dublin was because when I stayed behind to get ready while she waited in the lobby I ate the entire box of leftover chicken wings that we took home from the restaurant the day before.

I ate 15 cold, oily chicken wings in about 5 minutes at 9 AM before heading out for breakfast.”

“When I play video games and my wife isnt here, I narrate what I do and respond to fake questions from a non-existant chat like I’m some kind of big shot streamer.

I even look at a fake camera when something happen lol.”

“My wife h**es her dad more than anything, we haven’t talked to him much after he refused come to our wedding two years ago since he thinks she could do better than me.

She is like him in so many ways, I would never have the heart to tell her.”

“Our cat didn’t break the towel rack. I did.

I was pretending to be fighting zombies and grabbed it and… ripped the thing off the wall. I heard her coming to check out the noise and looked down at my cat.

She came into the bathroom to me asking my cat “Why did you think the towel rack could hold your weight? You silly cat!””

“Last night you made fried rice with shrimp.

I ate the whole bowl even though it tasted nasty.

God it was awful.”

Do you have any secrets you’d like to get off your chest?

Go ahead and lay it on us in the comments.