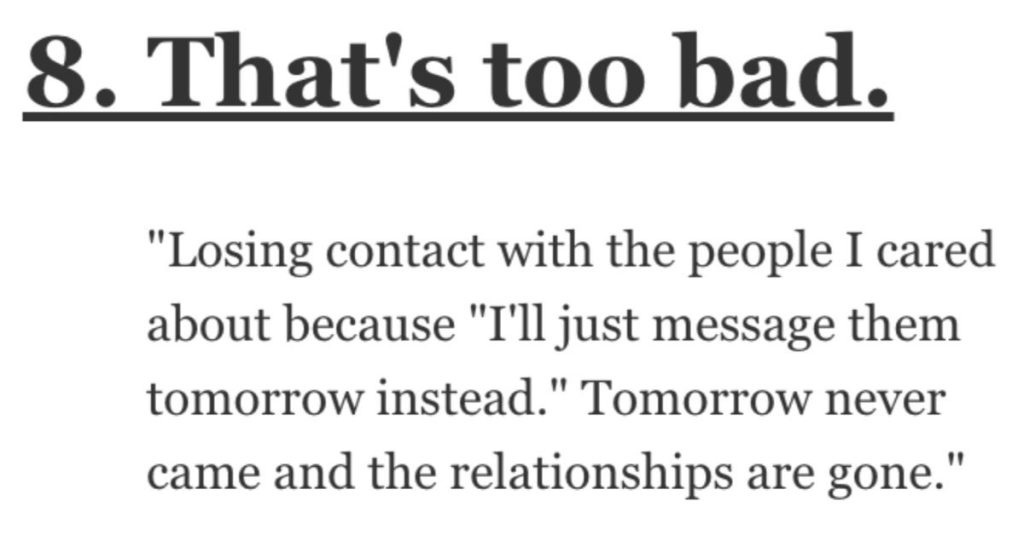 What Was the Worst Decision of Your Life? People Shared Their Stories.

It can be very difficult to admit when you’ve made a mistake in life.

And it can be much, much worse when a decision you’ve made is so bad that you consider it to be the worst decision of your life.

And today we’re going to hear from people on AskReddit about what they consider to be their worst decisions.

“Getting married despite knowing it was not a good idea.

Everything will be finalized in February and it cannot come fast enough.”

“Moving away from my home state and mom to go to the same college my dad did.

I thought he’d support me. Silly me.”

I’m a terrible addict and I’ll probably never quit but these things should be against the law. They are really bad – REALLY bad. People should not s**ke.”

In my defense, I think 18 is too young to expect a young person to know what they want to do for the rest of their life.”

5. You gotta get out there.

“Hiding inside behind my gaming computer from the real word instead of socializing in all of my young adulthood years.

I had opportunities, I had friends but I always just said no.”

“Leaving Australia and coming back home to the UK, I had a legit shot of starting a new life for myself, instead I came back to here for no real reason other than family and friends which I don’t see that often, became a father within a year being back with a toxic woman.

I’ve regretted it ever since, love my kids to bits and I’m always there for them but I h**e my life to no end, I’ve accepted it is what it is but there’s always a moment here n there when I think to myself what could have been?”

“Not visiting my cousin while he was in hospice. He to see me but I was too scared of his sick state being what I would remember him as.

At the time I believed seeing him in such a state would make the grieving process harder but turns out the only thing that changed was the regret I felt… I miss him every day and if I could tell him anything, it would be “I’m sorry,” above all else.”

“Losing contact with the people I cared about because “I’ll just message them tomorrow instead.”

Tomorrow never came and the relationships are gone.”

“Listening to “adults” who told me video game and computers would never result in a career.

I graduated HS in 1985 and the opportunities in both were jut about limitless.”

“Self medicating with illegal drugs.

I’m 84 days clean today and life is so much brighter.”

“I quit my job of 10 years in 2008, thinking I could get another easily. Don’t quit your job until you have another lined up. I had no idea of the upcoming recession.

I lost my savings, retirement, house. Destroyed my credit. Had to rent for 8 years before I could even begin to start fixing things.”

“Not believing I could do better and continuing to work as a barista or server until my 30s.

Sure, the tips were really good, I got to live downtown in a big city, drink craft beer on patios with my hipster friends and commute fifteen minutes each way on a fixed gear bike but what happens when I reach retirement age?

So I had an epiphany after a near-d**th experience, applied for an airline job and to my surprise, got it. It comes with wicked good benefits and a pension but this being a complete change in career, I’ve had to start from the very bottom. No more tips.

Instead, I had to finally get my license, buy a car and pay a s**t ton in insurance because I’m an inexperienced driver. I had an incredible downtown apartment but I couldn’t afford it anymore so I’ve had to move out of the city. I haven’t seen most of my friends in a very long time.

Pretty much everyone around my age who started with the airline in their late teens/early 20s has been able to buy a house and start a family by now. They’ll even be able to retire early.

Can’t turn back the clocks, can’t be mad about the wonderful experiences I’ve already had, can only charge forward with gratitude.”

“Getting in debt when I was young.

Money was a taboo subject in my family of origin, so when I was on my own, credit felt like free money. I’ve fought those habits and that compound interest for 20+ years now, and it makes me sick to think of how much money I’ve wasted.

Even if I had only saved the amount equal to all the interest I’ve paid, I would now be very well off.

Young people, learn from my mistakes and live within your means no matter how hard it is. Start a retirement account as soon as you can, even if you can only put in $5 here and there. Make compound interest your slave instead of the other way around.”

Tell us your story in the comments!