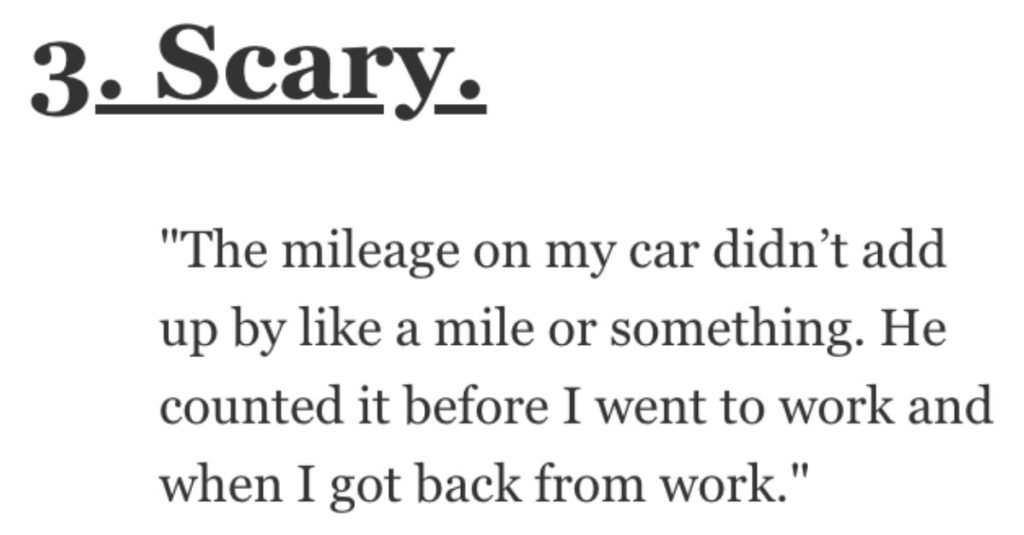 What Was Your Partner’s “Proof” When They Falsely Accused You of Cheating? People Shared Their Stories.

But it happens all the time!

Check out these stories from AskReddit users about the “proof” their partners offered when they falsely accused them of being unfaithful.

“She found a pair of women’s panties in my underwear drawer. The brand was “Strawberry”, embroidered strawberry on the waist, powder blue, size small. I told her they were hers and I had washed them.

She wasn’t having it. I told her to show me the underwear she had on at that moment. “Strawberry”, embroidered strawberry on the waist, powder blue, size small. She still didn’t believe me.”

Her proof? Other women existed. I never did, but if I acknowledged the existence of other women the accusations would start to fly for the next two weeks.

What finally caused me to get a divorce? Finding out about her affairs.”

“The mileage on my car didn’t add up by like a mile or something.

He counted it before I went to work and when I got back from work.

I literally went from his place to work and then came back to his place.”

“Because she hit *69 on my phone and a girl answered.

Turned out to be her roommate, because the only person I ever called from my phone was my girlfriend.”

“My ex was incredibly distrustful. I was young and didn’t know any better. One day he confronted me saying he had proof I was cheating.

I was incredibly bewildered as I am the faithful type and wouldn’t even look at another man. When I pushed for proof he admitted to having me followed by a private detective who had seen me get into a red Mini.

The Mini belonged to a colleague who gave me a lift home from work one day. A female colleague. I ended the relationship there and then and chalk it up to a lucky escape.”

“They saw I was online on Skype. Thought I was talking to some side piece.

I was talking to my cousin who lives in another country.”

“She said “Look at me” so I did, then she started bawling her eyes out saying I’m probably cheating on her because “your pupils dilate when you look at someone you love”.

“When my wife and I had 1st begun dating, I had a phone that had a bad habit of pocket dialing.

One day, she was acting very standoffish So I could tell something was up. I kept asking her, and finally she got really upset and started grilling me about who that girl was that I was flirting with on the voicemail I left her when I butt dialed her.

I pulled up my call logs, and sure enough I had accidentally called her the previous afternoon. While she and I were hanging out in the library. She was concerned that I was cheating on her with herself.”

“She was jealous of a female acquaintance I had at the time ( I use that word because we were friends through my cousin not actual friends) and she is a very in your face funny type of individual.

She unlocked my phone when I was sleeping and scoured it. I woke up and saw her. Had a long talk, she cried, I got annoyed.

Dumped her the next day. Found out she was projecting because she had been cheating our entire relationship (just over a year together). So, there’s that.”

“I was out of town and my brother stayed in my apartment.

My girlfriend came to visit in my trip and I asked her if she could go to my place and bring me some undies from my dresser.

My stupid brother left some condoms in my undies dresser. It was almost impossible to convince her those condoms weren’t mine.”

“My so-called best mate told her so it must be true. It appears everyone in the village knew too .

Except me and the girl involved. Slept with my mate to get her own back.”

“Wasn’t sleeping with them as often so I MUST have been seeing someone else.

Wasn’t sleeping with them due to me working an ungodly amount to pay the bills since they didn’t have a job at the time.

That and I would work 6-7 12hr shifts in a row with a daybreak, and the last thing on my mind was exercise.”