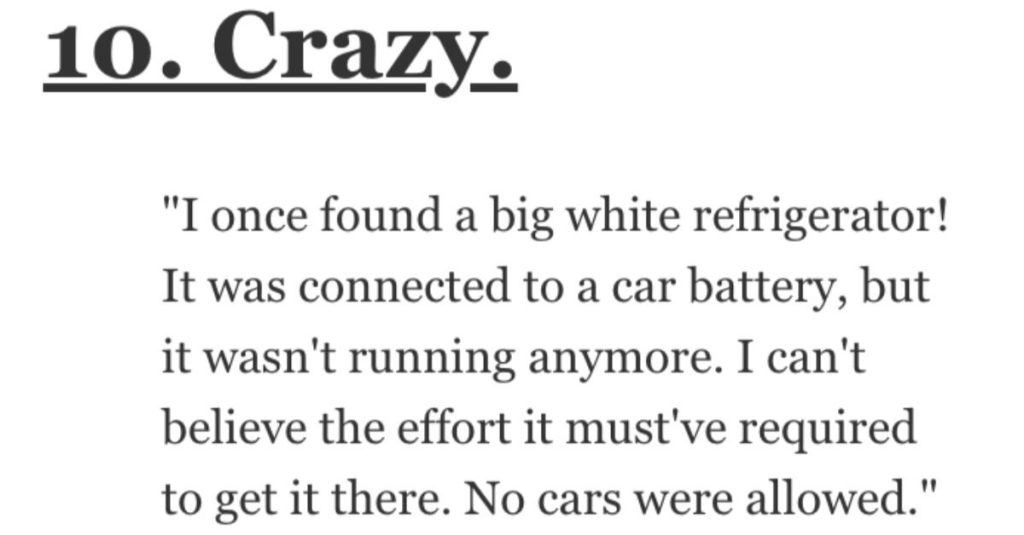 What Weird Things Have You Found After Festivals? People Shared Their Stories.

I feel sorry for the people who have to clean up after music festivals, I really do…

In fact, I kind of feel sorry for people who even GO to certain music festivals, if I’m being honest.

Because it looks like a whole big mess a lot of the time.

But enough about me, let’s hear from AskReddit users about the weirdest things they’ve found after festivals.

“I think the weirdest thing I’ve found was a Shiva Lingam sacred stone from the Narmada River in India.

The basis for the magic rocks in Indiana Jones.”

Two phones, a few wallets, used and unused condoms, little baggies, not all empty, lots of sunglasses, a dress.”

“Lots and lots of drugs.

Ketamine-laced ecstasy pills, 10 or so tabs of acid, a scuba tank full of nitrous oxide, weed, and a pack of Hot Dogs.”

“Did littler picking after Download festival, some of the highlights include many a ruined tent left behind, few needles, even a fairly wrecked car.

All in all was pretty grim.”

“I found a small wad of cash tied with a rubber band . Instinctively I was just curious to know how much was there. Turned out to be around $250 if you convert it from my local currency.

I probably would have kept it , but sadly it did have a small piece of paper with along with the rubber band and a name .

Unfortunately I knew the person although not close to me. Gave it up at the office and it was returned the next day .”

“Found a pretty fresh pair of timberlands that were in my exact size!

I turned them in to an official, but what a miserable feeling of getting back to your car, fumbling for your car keys, and not finding them, then turning around and looking at the acres of parkland, all in the dark, wondering where to even start looking, wondering if they were found and turned in, who would they have been turned into.

It was a bad night for someone or maybe a family.”

I also found a larger bag of unknown pills on the walk back to the car when leaving the venue .

We were successful on getting the iPhones back to their owners rather quickly . Both rang within minutes of finding them.”

“I once found a big white refrigerator!

It was connected to a car battery, but it wasn’t running anymore. I can’t believe the effort it must’ve required to get it there. No cars were allowed in the camping area.”

Bottles of urine at numerous locations. In one instance a pile of bottles filled with urine. I’ve been to Roo four times and 100% empathize with anyone not wanting to walk all the way to a porta potty. But you can’t dump it out in the morning or before leaving? C’mon

The most annoying thing was those hydro bead things. The volunteer supervisors said everything that wasn’t grass or dirt had to be picked up. Those little things are obnoxious.”

Credit cards, debit cards, IDs, other plastic cards with white powder on it, and other than that just loads and loads and f**k loads of beer cans. More than $1,000 worth (here in MI, they’re returnable for 10 cents each.)

It’s a three day festival. Everybody camps there at the Nascar track. It’s called Faster Horses in Brooklyn, MI. Big crazy redneck party. I was cleaning up doing some community service.”

Have you ever found anything weird after a festival?