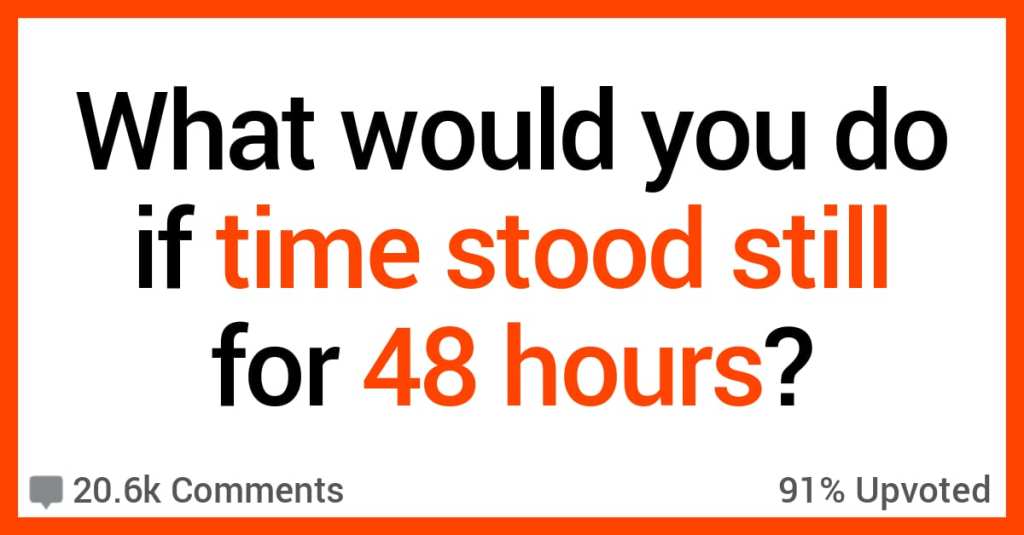 What Would You Do if Time Stood Still for 48 Hours? Here’s How People Responded.

Before I found out that time was going to stand still for 48 hours, I would want to learn how to fly an airplane so I could fly wherever I wanted and do some serious exploring without any interference.

What do you think your plan would be?

Folks on AskReddit talked about what they would do if time stood still for 48 hours.

“About a half hour of not realizing, 47.5 hours of existential crisis, followed by years of therapy.”

What are they gonna do? Report it to the police?”

“I would be a bank robbing mofo!

I could amass one hell of a stack in 48 hours.”

Pick up all of the dog cr*p in my neighbor’s yard and put it in her living room.

And…. steal the Declaration of Independence, then hide it in Nic Cage’s house.”

5. Enjoy the peace and quiet.

“I’d steal a bicycle (because I don’t own one) and ride around enjoying the quiet and stillness.

Maybe an electric bicycle, because I’m old and fat, and in reality I’d probably last 10 minutes on a regular bike.”

“Move everyone slightly off the ground not enough to get hurt but enough to realize you’re falling making sure everyone is in the exact same position.

Except one person hanging off of something very visible so everyone gets a weird falling feeling except that guy who really can’t explain why he’s in a harness hanging of 2 light posts.”

“Walk around naked with no shame.

Do a helicopter every now and then.

Find a nice spot, drinks some beers, whilst having some music on.

A basic way to spend my 48 hours, but a peaceful one.”

Change things ever so slightly like switching peoples’ clothes, turning them around, turning cars around, put a dog leeah in random peoples’ hands.

So many minds are going to be blown!”

“I would think about doing illegal things, but then I would wonder if people were just not able to move but could still see what I’m doing, so I would be too scared to do anything.”

“I’d “go shopping”! I would hit all the big corporate stores and just steal everything of use. I’d finish my Christmas shopping.

I’d steal a fridge and a few freezers and stock my garage with food for a year. I’d steal items that are going to be rare favs this Christmas and then resell them on ebay once time unfroze.

I would hit the dispensaries and steal all of the weed. I’d take cash from all corporate stores. I would be set up for a long time.”

“This might be kind of weird, but I steal all the really good toys from Walmart that are on the hot lists right now.

Not like every single one, but quite a few. Walmart can take the hit.

Then I donate all that sh*t to Toys for Tots.”

I would jump from one idea to another and won’t be able to start until the times over.

“First thing I do, get in my car and drive somewhere ~10 hours away from me.

I then start going around to jewelry shops and I start taking the precious metals. Mostly ignore the gemstones, those have lesser value on the resale and also have the possibility of getting tracked (gemstone chemical signatures and such are tracked to some extent for this reason).

I spend the bulk of the next 20 hours or so just loading up on gold/silver/etc before driving back towards my hometown.

Somewhere ~2 hours away from home (probably on the opposite side of where I did my thefts) I go to a spot in the middle of nowhere and I dig a hole in the ground in some very out of the way spot and I bury the metals there. I then head home and at that point I should have a few hours left. More preparation is needed.

The MOMENT that time resumes, I go to my car and I head out into town to my various usual shops. The Starbucks, the Subway, the grocery store, the hardware store, etc. And I make it a point to chat with the people there, maybe I hit on some of the employees (while dying inside, that’s not really something I do) just to make it a little more memorable in their minds. Pay for EVERYTHING using my credit cards. Stop by my bank and do something, like buying more checks or something.

The whole point of all of this is that if I left any DNA or anything behind, or somehow there was other indication that I was there, I have this alibi. Sure, you might have my DNA at the scene of the crime(s) but how do you explain that I provably was in my hometown 10 hours away from the crimes? I definitely don’t have a twin!

Either way, after a year or two (even if there’s no sign that they are onto me) I go and pick up the metals. From that point I set up a little home-forge (they are pretty easy to make for <$200 using random materials). From that, I melt all the metals down and I cast them as “artistic sculptures”.

Little things like a pound or so. Then from this over time, I drive around and go to pawn shops wanting to sell “my art”. Inevitably they won’t give a sh*t about the artistic value of these things but will likely pay for them in terms of “It’s a 1 pound solid gold statue. I’ll pay for the 1 pound of gold.”. And slowly but surely I convert all these things into cash. Never visit the same pawn shop twice.

As far as the cash is concerned, basically just start paying for everything in cash, though I don’t go ONLY with my ill gotten cash. Withdrawn money from my bank account now and then and when I’m paying for things, go 50/50 between the dirty money and the real money. Either way, I hide the sudden existence of the money by spending it slowly over time effectively reducing my expenses.

In this way my bank accounts have no real visible difference in behavior other than I appear to be living a bit more frugally. It wouldn’t be enough to trigger any audits so I should be good.

In the end, the reason I end up being able to buy something flashy is because it LOOKS like I saved up money over time, and I did if only because the dirty money helped me reduce my visible expenses.”

What would YOU do if time stood still for 48 hours?

Talk to us in the comments. We’d love to hear from you!