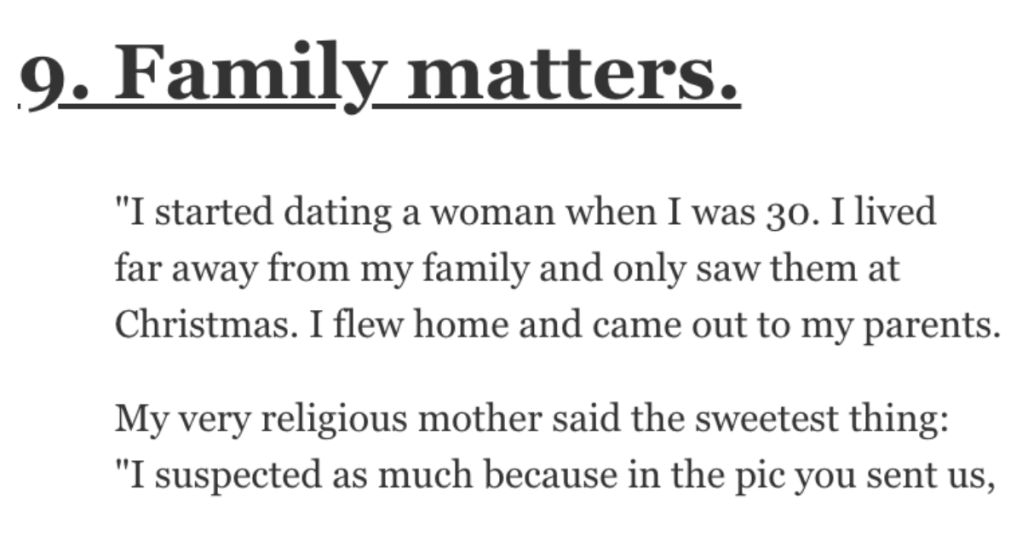 What’s the Most Interesting Coming Out Story You Know? Here’s How People Responded.

Along with proposal and wedding day stories, you have to admit that coming out stories are pretty interesting.

Imagine the fear and anxiety that most people go through for years until they decide they need to get it off their chest and tell their friends and families.

It definitely makes for good drama!

Here are some interesting coming out stories from folks on AskReddit.

“My brother didn’t come out until he was 18. First, he wanted to speak to our mum and dad in private first and then he asked if they could tell everyone else.

My mum told me and the first thing I did when I saw my brother gave him a hug and said I am here for you, I love you no matter what and that I am proud of you. He is in his 30’s now and I don’t know if he has dated anyone or not coz he is a very private person, and he is also As*xual.

We have a close relationship and he can tell me anything, of course in his own time. I just ask him every so often if he is happy and that if he ever met someone not to be ashamed to introduce him to the family but I respect his privacy and if he wants to keep that part of his life private then that is his choice.

I just want him to be happy.”

“I came out when I was twelve. I had told a couple of super really close friends. But no one else.

My school was having a rainbow day, where everyone wore rainbows to support LGBTQ+.

I ended up drawing a bunch of pans*xual pride flags all over my arms. So, everyone found out by looking at my arms.”

Me: I have to tell you something..

BFF: Omg are you OK?

I came out to my mom as a lesbian about two years ago and to my surprise, she wasn’t surprised at all.

Apparently when I was two years old my aunt told her that I was probably a lesbian.”

“I came out to my two friends and was super nervous. The conversation went a little like this:Me: guys, I have something really important to tell you

Actually though, those two are still my best friends and they were super supportive!”

“Well my birthday was in July and my niece loves unicorns. So I saw this rainbow unicorn cake at the store and I told my mom that I wanted that cake, she totally bought the whole “ Alexia will love this cake” card. Little did she know my gay heart was on a frenzy!!!

My sisters pulled me aside later and asked me why I picked the cake. I said “Surprise I’m gay” they looked at each other and laughed and said they knew for years because when I was 6 I said that I was going to marry princess tiana and my my said no I will marry the prince but apparently I turned to her and said no I will marry tiana because she’s pretty and I want to kiss her.

I don’t know why I didn’t know until this year🤪.”

“I have a VERY interesting coming out story. At first I came out as pans*xual, then realized I was a lesbian.

THEN I started noticing my crossdressing, and finally put a name to it, then noticed what I was. So, to sum all this up, I am your friendly neighborhood nonbinary (they them) girl liker.”

“I had really bad gender dysphoria but I thought it was just me being a teen and wanting to be perfect.

A few days later I was talking with my (trans) friend, trying to figure out how to get it to stop and he said that what I was feeling was gender dysphoria and he started throwing out gender identities, genderfluid felt so right I started crying and had to call him and thank him 1000 times.

A month later I’m getting more and more depressed, and listening to punk rock to help cope… needless to say my parents noticed and asked what was up. I told my friend that I might have to come out to my parents and he helped me write a lil’ coming out speech.

I’ve been out as genderfluid for about 3 months now and have already changed my name! I feel awesome!”

“I started dating a woman when I was 30.

I lived far away from my family and only saw them at Christmas. I flew home and came out to my parents.

My very religious mother said the sweetest thing: “I suspected as much because in the pic you sent us, taken by your “friend”, it was obvious you were looking at someone you are in love with”.

I had indeed sent them a pic of me taken by the love of my life a few months prior and told them it was taken by my female friend.

Anyway, that’s how my coming out at 30 went way better than I expected!”

“I came out at sixteen and got kicked out of the house for it.

Didn’t last a day before they cried and asked me to come back, but my relationship with them is never the same. I came back after a week, and since then never felt like that part of my life has to be open and known to them. It was such a relief and anticlimactic when I came out in a classroom, that I thought it would feel the same when I finally did to people closer to me.

In the decade following, I still struggle with understanding myself and my orientation but it’s no longer of utmost importance. Everything connects with each other. By simply living my life, reflecting sometimes, interacting with others, relishing in my solitude it’s getting a bit more clear. Kindness is beautiful.

Confidence and passionate are s*xy. Humor is cute. Any gender, any person can have these qualities. I have been attracted to females, males, and trans women and men. I have dated, loved, broken some hearts, and gotten mine’s broken in the last decade.

Regardless of your orientation, life and relationships are sometimes hard/tedious/demands effort.”

Do you know of any interesting coming out stories?

If so, please do it in the comments!