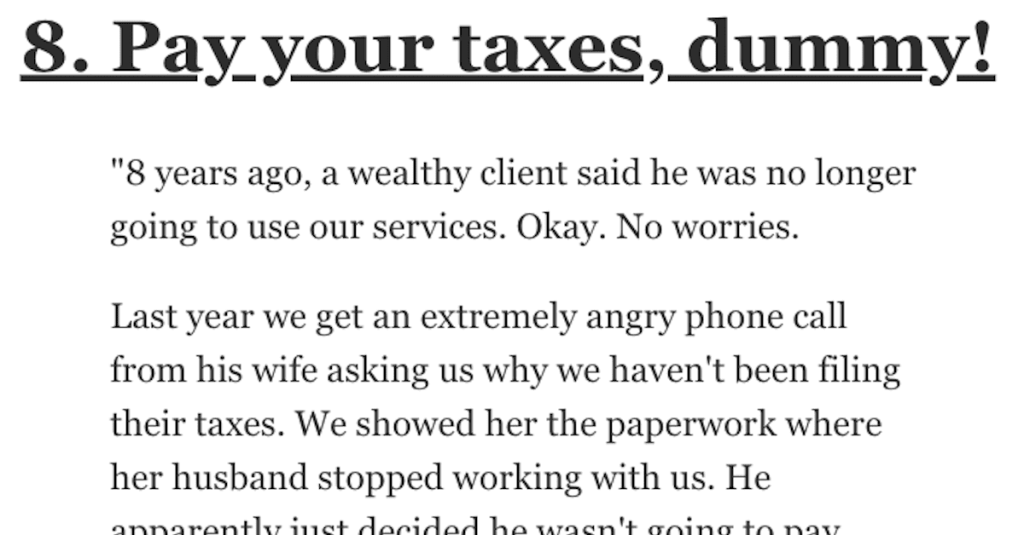 You gotta be careful with your cash, folks!

I know that sounds like pretty lame advice but believe me when I tell you that people make really bad financial decisions every single day that end up costing them everything they have.

And it’s a darn shame.

Let’s dig into some stories from folks on AskReddit.

“I had a client in her 70s put her whole savings in Tilray stock. Tilray at the time was trading above 150 per share. I told her it was a terrible idea to put all of her savings in one investment but she told me I was wrong.

She argued with me for a good 15 minutes until I relented and said okay, it’s your money. So she put 300k into Tilray.

Couple weeks later it starts dropping, I call her and get no answer. It’s sitting at 6 dollars a share now, her account is down to about 12k.

Last time I spoke with her I took no pleasure in telling her she’s no longer my client.”

“I know a guy who lied to his wife for maybe 3 years about paying taxes and him “doing the books.”

They’re old and can’t make enough now because he lost his license for his work.”

“I had a client buy numismatic gold coins with an entire retirement account. She bought 266k worth of coins at almost double the price of bullion.

I got the gold salesman on the phone and asked him to justify the reasoning and I he said it was because the dollar was paper money and worth nothing and that gold was going to go to 10000 a coin. I asked him what he exchanged this gold for and he said “well she paid me dollars”.

Then I said “why would you accept a worthless currency for your rapidly appreciating gold currency?” He cursed at me and hung up and said I didn’t know what I was talking about.

I still haven’t met a gold salesman that can answer this. Their whole pitch is that the dollar isn’t worth anything but they happily take them in exchange for gold coins.

The whole thing is sh*t. Poor lady. She can’t sell them now even with gold bullion as high as it is for anything close to what she bought them for.”

“Saw a guy invest about 600k in a start-up. He confirmed in the 1.5 pages agreement that he was fully informed about everything going on.

Please if you invest in that size, ask a lawyer to at least review the agreement.

“I had a client that had the money to pay for his kids college without taking out any loans. Instead, he decided to take out a loan on his house to pay for college in order to claim a deduction on his tax return.

When I explained to him that the benefits he’ll get from claiming the interest deduction on his return would not outweigh the amount he spends on interest he was certain I was wrong, even after I showed him the total amount of interest he’d pay and compared that to the expected tax benefit he’d receive for it.”

6. Tried to time the market.

“The client who tried to time the market with the coronavirus drop back in March. He was 55 and had a 7 figure amount in his 401(k) and was 90:10 equity:bonds.

His plan was to time the market by shifting his entire allocation to a money market/ bonds, wait for the market to drop more, and then shift back into equity. This was at the end of March.

I tried to warn him. He didn’t answer my subsequent calls.”

“I’d rather focus on investments for this call” well you’re gonna get 10% in the market if its a decent year and you’re paying 26% in interest so you’re losing money. You have a 50% debt to income ratio, you can’t get a mortgage.

Yes, I know the kids really wanted a pool this year, but you have $50,000 of CC debt to pay down before it makes sense for you to start saving for their college.

90% of the time they seem irritated and ghost me because I don’t have some magic solution to make their credit card debt disappear.”

“8 years ago, a wealthy client said he was no longer going to use our services. Okay. No worries.

Last year we get an extremely angry phone call from his wife asking us why we haven’t been filing their taxes. We showed her the paperwork where her husband stopped working with us. He apparently just decided he wasn’t going to pay taxes anymore and didn’t file a return for eight years and had been lying to his wife.

They were rich and owed almost 1.4 million dollars in taxes not including interest and penalties. And oh yeah they got absolutely fried by the IRS. If you are in a relationship with someone you need to be involved in financial decisions.

Never let one party handle all of the money and make all of the decisions. That is how bad things happen in both business and in relationships.”

“I had a client who wanted to know how to give away her 401k because her and her husband’s pensions were already enough for their lifestyle and she didn’t want to be in a higher tax bracket.

She was in her 60s, worth millions, and did not understand how marginal tax brackets work. Or even basic math. She wasn’t looking to get a deduction through gifting stock. She (clearly) was nowhere near that level of understanding taxes.

She just spent her entire life working hard and being extremely frugal, which led to her being a millionaire who lacked a basic understanding of money.”

“Former manager at a credit union. One seemingly smart lady in her 70s got one of those lottery scam letters saying she won, but needed to send them money to process her winnings.

They kept getting her to send more and more money. We were telling her it was a scam from day 1, but we couldn’t stop her.

She burned through her IRA which had about 200k. Took out a loan against her paid off house for another 200k. Sold her jewelry. Probably paid out 500k total before finally realizing.

We truly did everything we could. Got her family involved. Several of us would confront her every time she came in and would plead with her to stop.

It was sad but at some point you have to cut your losses and realize it’s a scam.”

“I had a client that won the lottery.

It was a $10,000/month annuity FOR LIFE, give or take. Pretty sweet deal, right? Well, he never went and claimed the prize because he didn’t want to pay the taxes.

I told him f*ck the taxes, he can retire and never work another day in his life while still earning $120k/year. Nope, he’d have to pay the taxes so he didn’t go claim the prize. I think he even threw the ticket out. Dude makes like $60k/year and he turned down the lotto winnings.

Like, if you’re not going to claim the winnings because you’re THAT against paying any sort of taxes why bother playing the lottery at all?”

“Former bank teller here. Not sure if this quite fits the question but here it is.

Had an older gentleman who would typically only come in once a month and pull out a few hundred dollars for living expenses, nice old guy btw. One month he comes in twice in two weeks and pulls out $5k which was bizarre for him.

When he came in the third week in a row I planned on asking him if he was remodeling his home or something but I didn’t have to. He came in to get another $5k out and told me he had won the lottery but had to pay the taxes on his winnings, some of you already know what’s going on.

He had received a letter that he won around $3mil from the Kentucky state lotto, we were in Florida, but before he could claim it he had to pay the taxes on it. His account was setup that you could only withdraw $5k a week hence him coming every week. I tried to explain to him that he was being scammed and to stop sending them money.

He was no longer a nice old man when I said that. He accused me of being jealous of his winnings and that “he’d show me” when he deposited his millions in a different bank, then he left. I talked to my manager who then talked to the cops and they said there wasn’t much they could do since it was out of state. His family even contacted us and begged us not to give him anymore of his money when they found out what was going on, which we cannot legally do.

The only thing we could do was close his account because we didn’t want to have any responsibility in his downfall. He came in the following week, manager explained what was going to happen, and he left with a cashier’s check after quite a few more expletives. Found out a few months after that the scammers got another $50k out of him before his family was able to get power of attorney and control over his finances.

Not sure what happened to him after that but it’s a d*mn shame.”

Man, those are rough…

In the comments, tell us about the worst financial decision you’ve seen someone make.

Hopefully, they aren’t about you…thanks in advance!