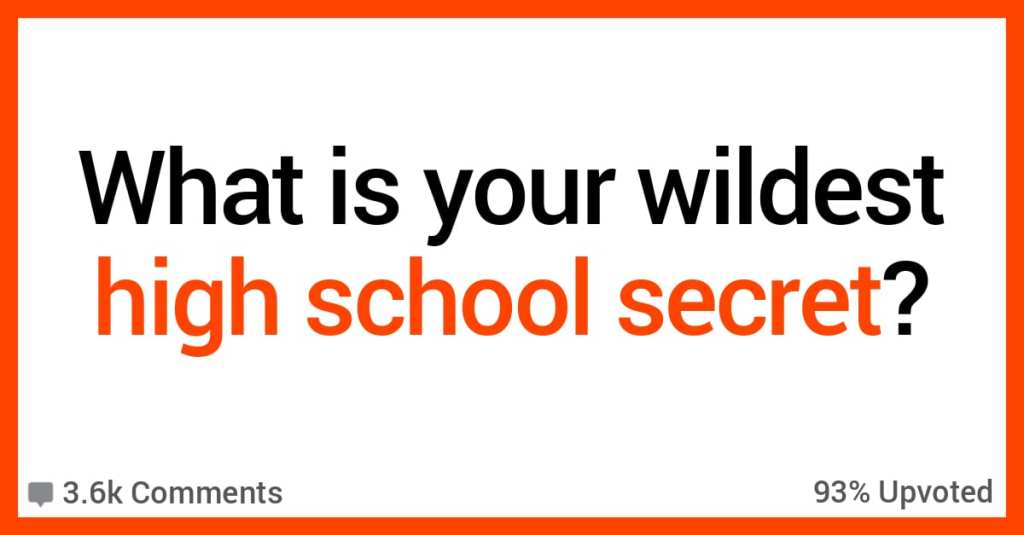 High school is a time to learn, a time to grow…and a time for crazy drama!

And we’re about to get a big dose of craziness. Are you ready?

“In the lights room in my high school’s theatre there was a couch that no one sat on because some tech crew got to rehearsal early and heard a couple going to “Pound Town” from outside the door.

The room was locked, none of the students had keys, and the couple was gone when the tech head opened the door; so, no one ever found out who it was.

I was the one receiving the pounding. There was a way to get to lights from back stage with an easy to pick lock. Snuck in, boinked, snuck out, never suspected.

Some of my cousins go to my old high school and apparently the couch is still there and is still referred to as the s*x couch… so that’s my secret legacy.”

“I went to a small school in Colorado.

In 8th grade our pottery teacher fell asleep with a lit joint or something and his house burned down. The cops found his stash. He had to give a really cringey “I have been living with my secret drug addiction” speech to all of us in class.

Thing was most the teachers in that town were doing a lot worse drugs then pot. We had math teacher come to class trippin balls on acid one day.”

There was fight club at school with like 30 members and we did not go easy on each other. I guess it can still be a secret if it’s a shared secret.”

“Worked at McDonald’s my senior year.

We used to have our girlfriends come over after closing (12:30 am) we would drink, watch p*rn and go f*ck in the ballpit/playground area.”

“Every year we had a student vs. teacher basketball game. The main Chad McChaddington pulled me aside 15 minute before the game and asked me to smoke.

Him being the most popular and sought after guy and me being.. me. I said okay. I had a blunt with wax on it. We got super stoned and he went on to play. Not just “stoned”, we were properly destroyed. Like autism.exe running on administrative level high.

I sat in the bleachers and watched this dude high out of his mind face off all the teachers, security guards and principal and dunk on them. No one even suspected he was high.”

“Senior year, i got directed by a janitor to grab some towels from the Janitors Closet to clean up a spill in my classroom.

To get to the closet I had to pass by the teachers/staff break room. I saw an open teachers edition algebra book and no one around….

“One of my classmates shotgunned his parents dead and went to prison.

I liked the guy. He was a good kid. He was liked by all. He never did anything bad to kids in school.

He never made fun of or picked on other kids. He was slightly popular.”

“Was in stage crew.

Got a bl*wjob up in the roof catwalk from girlfriend while hundreds of people were watching the annual musical. Never missed a spotlight cue, no one saw or knew.

Never told anyone I went to HS with.”

“Guy I went to high school with got kicked out of our school and not too long after that overdosed over a weekend. A teacher made a comment somewhere along the lines of “he got what he deserved”.

I didn’t even know the guy, just knew of him. I went home that night and created a fake Yahoo email account and emailed every single teacher and staff member about what the teacher said and pretended to be a rich donor demanding an apology in front of the entire school at the end of the upcoming end-of-year assembly by the teacher who made the comment or I would never donate another dollar.

The next day I saw a couple teachers reading my email on their computer, so I know it was a conversation topic among the teachers. I got a couple responses, one from my English teach saying he could tell it was a student email from the emotion it was written with.

There was no apology in front of the school, but I know the teacher who made the comment was thoroughly embarrassed. I never told a single person about the email.”

“The principal likely used her connections with local and regional politicians to cover up a huge scandal involving cheating during the finals.

Some seniors managed to send one of their parents (a lawyer, no less) infos about the exam’s topic and the mom put the answers on the school’s bathroom windowsill.

They called the cops, the finals were suspended but eventually went on as scheduled with the kids involved getting top marks.

Later on there was a trial for fraud, but to nobody’s surprise, they were all acquitted for some reason.

“I lived a double life in high school.

My home life was spent manufacturing amphetamines while I played nice at school. None of my friends knew for years that I was a cook. I gave my friends weed to keep them away from the harder drugs.

Once I got older about 17-18 I realized the people who raised me were f*cked up and manipulated my loyalty.”

“I would pay the student office assistant every week for vacant lockers and their combinations to stash tons of weed in.

We had police as security at our school who would bring dogs sometimes. I would rotate lockers and keep it all split up. I would never have anything one me.

Once one of the lockers got busted and they never found out who’s weed it was.”

“I accidentally caught my teacher watching p*rn during lunch when I went back to get my phone and I sort of blackmailed him into giving me a good grade in the class because chemistry is hard.

Apparently it wasn’t the first time someone caught him either. All science teachers are weird”

We’d love to hear your stories!