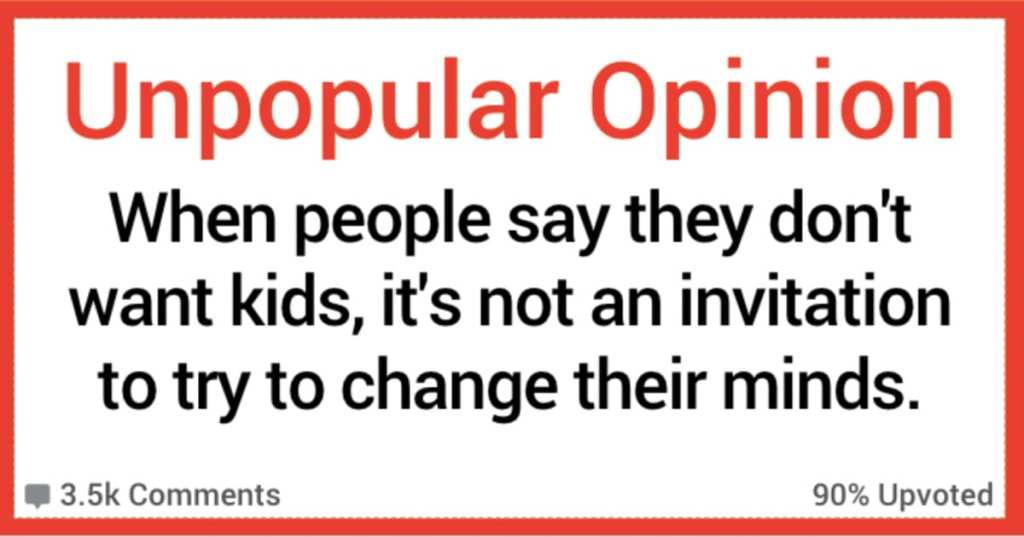 When Someone Says They “Don’t Want Kids,” You Shouldn’t Argue With Them

The thing about human beings, and life in general, is that it leaves plenty of space and time for having opinions, growing and changing, and then deciding you want something different.

Or, perhaps… realizing that you were right all along?

Here’s somebody who has an “unpopular opinion” about NOT wanting kids… and NOT getting harassed because of it.

When a child-free person – no matter their age – says they don’t want kids, that’s likely what they believe in that moment, and listen…whether or not you think they’re going to change their minds later on, there’s really no need for you to say anything.

Tough, I know, but you can do it – and these 15 responses to this Unpopular Opinion might just convince you of that once and for all.

Im pushing 40 with no kids and the ‘are you having kids’ talks are a common topic now.

I have been told that I’m an investment to my parents future and I should have bought my mum a house by now and provided her with grandkids for her to spoil (her words not mine, I was about 30 when she said this)

I never considered not having kids to be any sort of loss of mine, I made this decision because my parents are very manipulative horrible people who I would never want my kids to meet. I love my kids, so I won’t bring them into this family of manipulation, abuse and greed.

I had my tubes tied and people STILL tell me I’ll change my mind.

We’re in our mid 30s and boy has it ramped up. Found out my wife has gotten panicked “But it’s almost too late!” from people.

Nevermind that she has health issues that would make pregnancy very dangerous for everyone involved, another baby is somehow required!

12. They want a different sort of life.

The main reason is the challenges associated with having a kid, but after a while you start to realize that living your life and deciding to just live for yourself without the creation of the next generation (of their family) is appealing more towards a younger demographic, since you can be financially stable, go out and enjoy things you wouldn’t be able to with kids, and have no obligations where you can take more risks knowing you have no dependants on your back.

On the other hand, eventually that kind of lifestyle can go so far. Unless you become like a super successful person that has to dedicate time to your career to grow, doing the same thing over and over again might get repetitive.

So it’s a dilemma that people are faced with since they need to enjoy life, but also sacrifice their freedoms in exchange for obligations, and many people find that hard to balance.

In another sense, it can also be out of respect as in you care enough knowing you are not in a position mentally and financially to start a family so you don’t raise a kid that might have a rough start. Everyone grows up, the only challenge is whether or not limiting yourself early on will still be your mindset 10 or 20 years down the line.

My sisters sat me down when i was 24 and tried to get me to come out of the closet bc i didn’t have kids yet. Started with the whole, “we love you, you know that, just the way you are”. I sat for a solid 20 minutes with a surprised pikachu face as they took turns telling me it was ok to be gay.

Then another 30 minutes of me arguing with them that i was in fact, straight, and i didn’t have kids bc i could barely afford to feed myself let alone a kid.

For me personally, I don’t wanna go through all of the physical and emotional pain of having a kid.

I also just don’t like kids, so I don’t want to suffer for something I’d never love

Been saying this since I was 16, never wavered for one second despite all the “you’ll see, when you are older” Got married at 29, had a vasectomy at 30.

That stopped the “you’ll see” comments 😂

42 now and don’t regret it for one second!

My husband has a vasectomy scheduled because we’re certain we don’t want any kids, but I have a few coworkers who insist that no act of man can prevent the will of God. Gag.

Started at a similar age for me.

23 now and still going on, but the fact that I never had a girlfriend and don’t have much interest in getting one (no sexuality shenanigans, I just have the sexual urges of a panda) kind of calmed my mother.

Or maybe she thinks I’m gay.

I had a hysterectomy and every once in awhile someone is like well you can always adopt. (For the record I had it done when I was 37) If I really wanted kids, I would have had one prior.

So now when someone asks I either say… yes I have a dog. Or I had a hysterectomy or just I can’t. It tends to shut most people up.

5. None of the arguments hold water.

The “selfish” not to have kids argument – So creating a mini copy of yourself/spouse that uses lots of resources is more selfish than not having this person that doesn’t exist yet?

“You and your wife are so smart, it would be a shame not to have kids!”. Are you going to take care of them? We don’t “owe it” to anybody to have kids. Let Idiocracy run its course for all I care.

Having kids is seen as the norm because EVERY friend you had growing up is the product of people that decided to have kids. It would be much more responsible if the default was not to have kids and then people put thought into if they do want.

It’ll get better with age.

When I was young I got bombarded with these same responses..

My family even had an intervention.. can you Imagine? A babyvention..

Anyways, now that I’m almost 40 its much more quiet..

Having more than 1-2 kids is selfish as f*ck. Almost 8 billion humans on this planet, were reaching the breaking point but no one seems to give a shit about slowing our fucking breeding down.

Also single child, my abusive af parents never really made a fuss about my decision to never have kids, asked my dad and he said he just wanted me to be happy and my narc mom just brought up grandkids once and then gave me a book about lesbians on christmas (am gay).

Only thing that the world would miss out on after this bloodline ends is my dads hair/male hair genes, like he’s 75 and still has blonde curly hair down to his shoulders meanwhile some kids in gymnasium were already balding…

Start saying “I’m not having any kids”.

“I’m not having” sounds like a done deal, a sure deal, said by an adult who knows what they’re talking about.

The way you phrase your words, matters.

As someone with two children who said she never wanted children, I can promise you nothing good will come of patronizing folks.

Do you agree? Is it hard for you to keep your mouth shut? Let’s hash it out in the comments