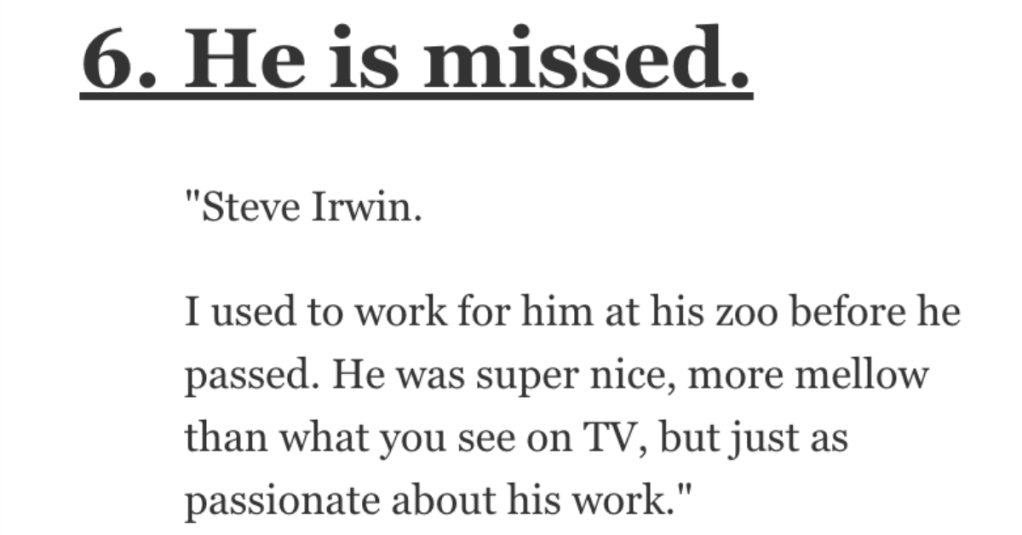 Who’s the Most Famous Person You’ve Spoken To? People Shared Their Stories.

Well, for the most part…except for the lavish lifestyles, the mountains of money, and the mansions they live in…

AskReddit users talked about the most famous people they’ve ever talked to.

Prepare to get star struck!

“I spoke to Hugh Jackman on the street after a Broadway show he was in with Daniel Craig.

I told him I thought he was an amazing actor and all around awesome person and that I’d seen almost everything he’d been in and he told me, “you’re even more awesome because your my fan and don’t ever forget that.””

I was wearing a red Darth Vader shirt that said ‘choking hazard’ and she laughed when she saw it, and said ‘I love your shirt!” I was trying not to gush, and asked her if I could pet her dog Gary.

We chatted for a few, mostly about Gary. She was super warm, and funny.

It felt almost like talking to a sister rather than a film star.”

He was playing a gig at my college and I was on my way to teach racquetball. He got out of a very nondescript Lincoln, and then grabbed Lucille from the back seat.

I waved, “Have a good show tonight Mr King!”

He replied “Thank you son, I surely will!”

Middle of the afternoon, between classes, just he and I.”

I was at the NASA Museum at Cape Canaveral (British tourist) but I also happened to be a teacher. They have an Education Centre, where teachers etc . . . can go and get loads of freebies for use in school. Whilst there, Neil Armstrong came in with his grandchildren and began greeting and chatting with people at random, including me.

He was pleased to meet a British teacher of STEM and was a lovely bloke. Everyone (including me) was in awe. He made time for everyone, but mainly the kids who were there with their teachers.

I got pics of kids just staring open mouthed in awe of him – after it was explained who he actually was!”

I worked at Dodger Stadium selling beer for the 2018 World Series. He calls me over and bought a couple of beers.

Looked at him and said “Well, I guess I don’t need to check your ID.”

He said “That’s sweet”, and chuckled.

I used to work for him at his zoo before he passed.

He was super nice, more mellow than what you see on TV, but just as passionate about his work.”

“My uncle did some promotional stuff with Food Network and they said they would send over “talent” to do some spots for radio with him.

I got a call from my uncle’s cell phone and it was Guy Fieri.

Talked to him for a few minutes, he was super chill and actually really personable.”

Served her a drink at a Halloween party in a nightclub once when I was bartending.

Great smile, very friendly, and a lot shorter in person than I would have thought.

“I spoke to Jason Momoa at a convention.

My wife is a huge fan and told me how the dude throws axes and drinks Guinness.

He didn’t say much during the photo opportunity, but afterwards I asked him if he was going to hit up one of the ax throwing bars nearby.

His face lit up and he said “I don’t have the time during this trip, but thanks for the heads up, brother!”

He then gave me a fist bump.

My wife was quite jealous.”

I served him coffee (I worked at an airport coffee shop) and we talked about skiing and Star Trek.”

11. Never heard anything good about him.

“I was in high school with Jared Leto.

I spoke to him a few times and every time he acted like a bully.

I would describe him as an a**hole.”

“I met David Hasselhoff outside of a Whole Foods, he was wearing a shirt that said “Dont Hassle The Hoff” I said hi to him, he came up to me.

He is extremely tall put his huge arms around me and gave me a hug and said that he loves the gays. I was wearing a gay pride shirt.

He also has the bluest eyes I’ve ever seen. Like piercing blue.

I worked at a store on Thayer Street in Providence, RI when she went to Brown.

I also worked on the same street at my cousins pizza place that she loved. So I literally would see and talk to her multiple times a week! Super nice, quiet and polite.

This was also the time where she would have a male friend go out with her and speak for her because as soon as she opened her mouth you knew it was Hermione Granger from a mile away.”

“This doesn’t really count cause I was a baby but Matthew Broderick held me. I was in a movie called “Election” and I had a few scenes in it.

Man I wish I was old enough to remember any of it but my whole life my parents have told me about it and how nice Matthew was.”

Have you ever talked to any famous people?

If so, tell us all about it in the comments!