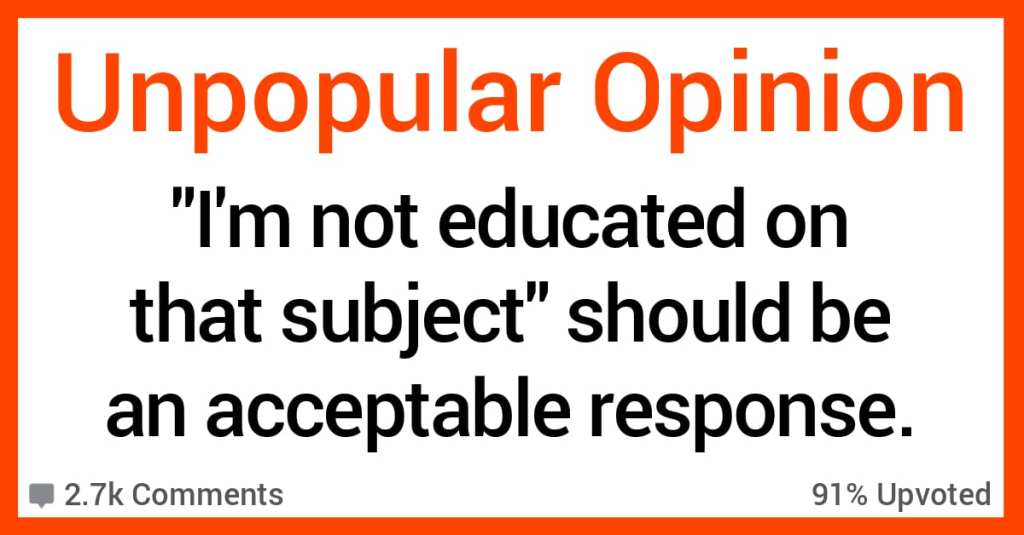 When someone asks us a question in every day life, I think most of us feel badly if we don’t know the answer – which is crazy, because no one knows everything about everything, right? Or even a little bit about some things, because we all have our specialities and areas of interest.

A person on Reddit wondered why it’s not socially acceptable to just say “I’m not educated about that” when we don’t know the answer, and to not judge people (or ourselves) for not knowing everything.

There’s this idea that every time someone asks a question about anything they expect some form of answer.

One of the most underrated skills is knowing when to shut up especially for us USA-ers. It’s perfect to tell someone I’m not educated in the subject or even IDGAF!

We’re about to find out!

12. Not even teachers know everything.

I teach classes to engineers and engineering students. I use this phrase regularly because they can come up with some great questions. Then, I come back later with the answers.

They respect me a lot more for it than giving an answer that’s not correct or vague.

I’m straight up when I dont know something. I’ll literally say to someone, unfortunately I don’t have much knowledge on that subject so I cant really speak on it. And everyone respects it. No stigma whatsoever

So yeah, more people should definitely admit when they don’t know something. Nothing will happen haha

I use variations of these quite often, my go to is, ‘I believe (X), but let me refer to (the expert source) to get the final answer, just to make sure you’re getting completely accurate information’ or ‘honestly, I don’t know but I’ll gladly look into it and get back to you once I have the answer’

9. It doesn’t mean you’re dumb – the opposite, actually.

It’s a trait I recognized in my father and grew to adore: if he didn’t know something he would say as much. He might have fun hypothesizing over what the answer could possibly be, but he wasn’t married to his guesses and would only do it as a fun exercise until he found out what the answer was.

Growing up with him as the most intelligent man I’ve ever known, and watching him regularly say he wasn’t sure about something or another, and then looking at my friends’s fathers and their reluctance to ever say they didn’t know something made me realize that the truly smart people know when to keep their mouths shut and defer to the experts.

Smart people become smart by learning the answers to their questions instead of simply assuming that their first guess is correct.

8. If you want to get specific.

I prefer “I don’t know enough to have a sufficiently reliable opinion on the matter, so I would be inclined to take the input of those more educated on the topic over my own opinion.

This will allow me to build a more informed opinion on similar situations, and develop a better discernment between wise men and sly men.”

7. Communication skills are for everyone.

It’s funny, (through great effort & many therapists) I have developed the habit. I actually used it earlier today. But I learned it because I never saw it used. My parents used communication skills so poor I was able to eventually extrapolate good skills.

But as a PhD today, I can definitely say that a significant indicator of intelligence is not knowing things but how someone deals with not knowing something.

For real. I do that all the time.

My background is in science and you will get s**t on if you try to talk about things you don’t actually know about. It’s second nature at this point for me to say “this isn’t my specialty, but these are my thoughts…” or whatever.

No one thinks less of you for being aware of your own limitations.

5. What was modeled for you?

I grew up with the exact opposite father. He would constantly make stuff up and acts like he knew everything. Watching his arrogant behaviour growing up (which has now devolved into him being a conspiracy nut who’s wholly anti-vaccine) caused me to vow to never be that way.

I’m not hesitant to admit I don’t know something, and I try to help others find answers if they ask and I don’t know the answer off the top of my head.

I was a supervisor of a small parts assembly team for a few years. When I started I had zero experience with their particular assemblies.

For the first few months whenever an employee would come up to me with a question, my response was almost always “I don’t know, but let’s see if we can figure it out”

This worked great to build a relationship with the employees and also allowed me as an outsider to give new ideas when their processes and procedures didn’t work very well.

My parents always said “you don’t need to know the answer for every question, just know how to find the answers you don’t know.”

I grew up with a huge dictionary and I always had to look up a word I didn’t know. They wouldn’t tell me the answer.

This also chains well into challenging someone who may be talking out of their a$$. “I don’t know enough about that to speak on it. What’s your expertise? How did you learn about it?”

A bulls*%tter’s position will quickly stutter.

I learned to do this the hard way. Years ago, a friend of mine and another acquaintance I didn’t know that well were on a walk. My friend asked a question about good exercises for someone with bad knees. Me being the know-it-all and an aerobics instructor, jumped in with some stuff I pulled out of my a$$.

The other guy was patient and didn’t say anything. After I was finished going on and on, he gave his input and really seemed to know what he was talking about. Later that day I found out he was a doctor. Then I realized she’d really meant for the question to be directed towards him.

I felt like such an a**. But from that point on, I never again just jumped to answer a question with the authority of an expert. I always assume that someone else in the room might know more than me. And if I’m not sure about something, I’ll admit it.

And if I do know a little bit about something but it’s all just from googling and not from a formal education, I’ll admit that too and say, “Please disregard this if someone more knowledgeable says otherwise. I learned this at Google University.” I think I’ve saved myself a lot of potential embarrassment this way.

I’m going to adopt this in my life – maybe you could, too, and we could start a trend!

Thoughts? Leave them in the comments.