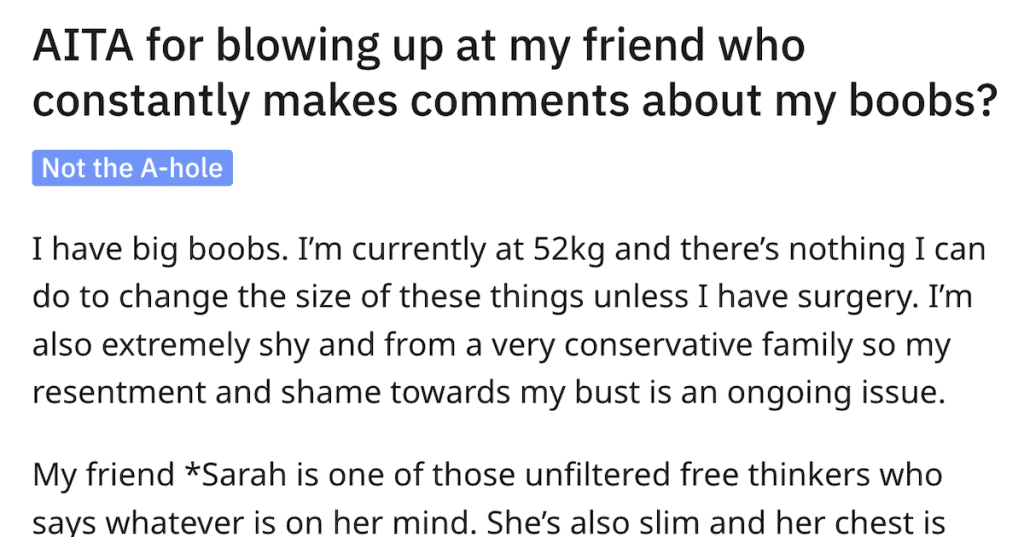 So… I’m a man. That means I find the following topic to be a somewhat difficult to address because I don’t have breasts. Basically, I have limited context of experience.

Yes, this is a story about a girl who is being shamed for parts of her body that simply exist upon her as a human. More specifically, she has a coworker who is (publicly) bringing unneeded and unwanted attention to her breasts.

The story goes like this: a well-endowed woman has trouble containing her endowments because they exist on her body and, despite her best efforts, there’s little she can do to hide her boobs and she’s made to feel bad about it.

AITA for blowing up at my friend who constantly makes comments about my boobs?

I have big boobs. I’m currently at 52kg and there’s nothing I can do to change the size of these things unless I have surgery. I’m also extremely shy and from a very conservative family so my resentment and shame towards my bust is an ongoing issue.

My friend *Sarah is one of those unfiltered free thinkers who says whatever is on her mind. She’s also slim and her chest is very much in proportion to the rest of her body.

We work together and I’m always secretly jealous of how great shirts and tops look on her whereas I feel I look very sloppy and unprofessional with oversized, ill fitting clothes.

A woman who is self-conscious about her breasts, and is trying to be okay with their size, does not need them pointed out at every opportunity or made to feel bad about a part of the human body that she had no say or control over–well, no control without discomfort. Surgically or otherwise. And that avenue is just not fair to her.

Sarah has this way of always bringing up my boobs in conversation, starting off complimentary but often ending with a subtle insult.

She knows they’re a physical feature I’m uncomfortable with but doesn’t let up.

Examples of things she’ll say is how my boobs look good now but give it a few years, and they’ll be down to my knees, hahaha! Or she’ll show me comments on reddit where people are discussing chest size preferences and most are commenting how they much prefer a smaller bust over large. Or just a general reminder of how work or men will never take me seriously because of my ‘cartoon boobs’.

I know she’s trying to have lighthearted fun but it gets to me and I’ve told her a few times to drop it before.

It should have ended with the statement “Drop it.” However, people can be unpleasantly persistent.

A few days ago, it was extremely hot and I was wearing a lighter, more revealing top than my usual baggy coverups.

I felt close to tears, made an excuse and left the meeting.

Sarah called me up half an hour later asking me what was wrong and I went off on her.

And there are times when that unpleasant persistence needs to be checked for our own sanity.

…(I) Told her to go f*ck herself and was sick of her constant jabs about my appearance.

I went on a 10 minute tirade and hung up. Sarah has been off sick since that day and we haven’t spoken again.

I’m wondering if I was too harsh and maybe should call and apologize for my outburst?

I think it’s fair to say that, no, in this case, our protagonist was not the a**hole. Aside from the whole thing being a rather solid sexual harassment lawsuit, Sarah is the retching brown eye in this situation for bringing attention to the boobs when the boobs did not need attention. Right?

Let’s see what the gallery has to say…

This person offers some encouragement and options that work for her as a tall person. Also states that her colleague is awful. Agreed.

She does bring up that being a man would get fired faster for such comments.

Unfortunately, this is not always correct.

You go and stand up for yourself, gurl! But maybe you can turn that 10 minuter into a 1 minuter?

Yes, all of this. Best advice on the thread. 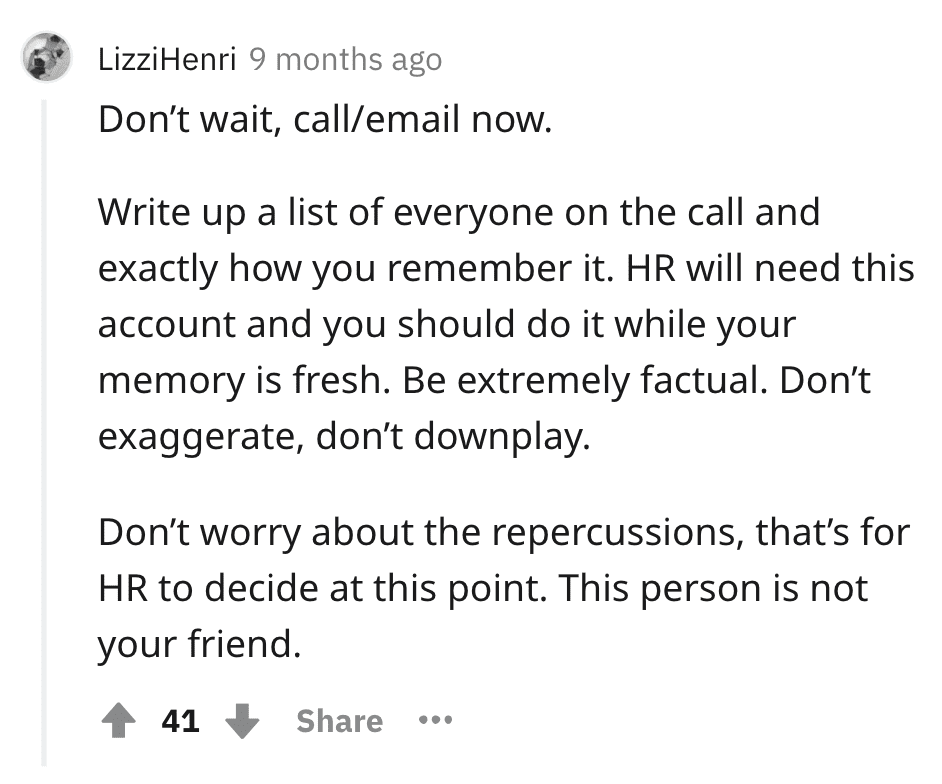 Lots of great advice in this thread, but we want to hear your take!