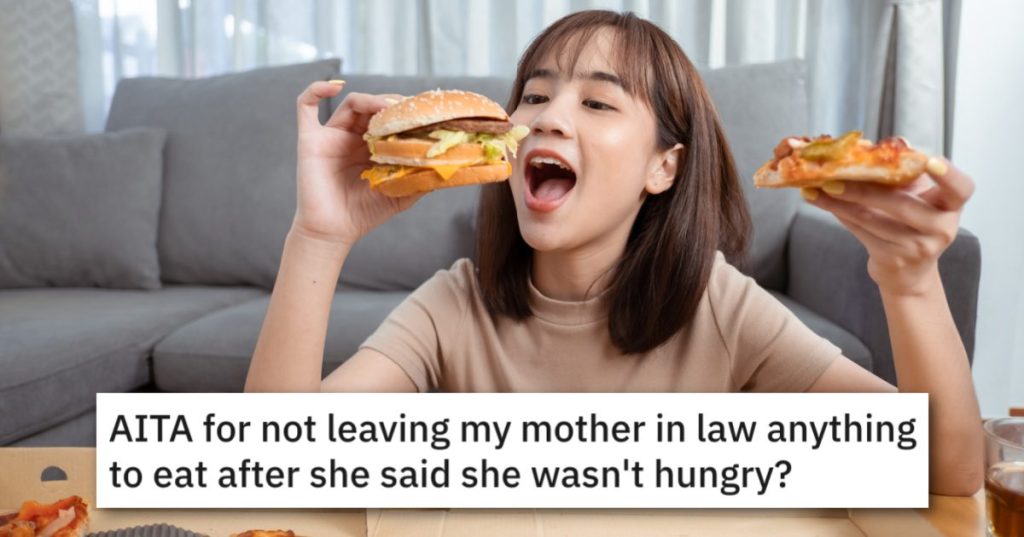 It might seem like a tired trope by now, but the stereotype of the horrible mother-in-law exists for a reason – there seem to be more of them out there than good ones, at least.

This woman is typically a health-conscious eater, but her hormones had taken hold and she wanted a chicken sandwich with chili.

Before making herself one, she asked her mother-in-law if she wanted any and was told no, she wasn’t hungry.

We usually do intermittent fasting meaning we don’t eat after 5 pm but when I’m on my period, my appetite gets several times bigger. Last night I craved for a chicken sandwich with chilli and I asked my mother in law whether she wanted any.

She said no she wasn’t hungry and since my husband doesn’t eat at that time, I only made one.

Then, after making and eating her food, her mother-in-law showed up looking for a bite (snide remarks in tow).

I quickly gobbled it up and when my mother in law came into the kitchen again, the plate was already wiped clean. She asked me in shock you’re done that fast?! I was pretty embarrassed and told her it’s my favorite.

Then she said and you didn’t think to at least offer people staying in the house with you a bite? I was confused and told her but you said you weren’t hungry and Jake (my husband) doesn’t eat at this hour.

Feeling badly, OP offered to make her more, and even went out looking for the ingredients, only to have her offering rebuffed.

She said you didn’t think to store some in the fridge in case I DO get hungry?! I told her I’m sorry I really didn’t think that far ahead. I’ll make a new one. But then I remembered that we were all out of chilli and sheepishly told her imma go buy some. She told me not to bother but I insisted.

But even after looking at several convenience stores, I couldn’t find the brand I was looking for and since it was nearly midnight by then, I didn’t have many options. I called Jake and asked him what I should do and he told me to just get one from a snack near us.

When I got home though and brought it to my mother in law, she refused to eat it and said I told you to forget it I don’t eat takeout. She insisted she didn’t want it nor did she want anything else as she wasn’t hungry, that she had just smelled the chilli earlier and wanted a bite.

So OP ate the second sandwich herself (if you don’t have a period, you don’t get an opinion on this).

The next morning she learned that her mother-in-law claimed to have gotten hungry in the night and – despite turning her nose up at takeout the night before – went to find the sandwich gone.

I told her okay if you need anything let me know. I went back to the kitchen and….. ate that sandwich too.

The next day, Jake and I wake up to find mother in law gone with a text sent to my husband that says she won’t be putting her foot in our house ever again for the amount of disrespect I showed her.

Apparently she did get hungry later and went looking for the sandiwch and couldn’t find it.

She texted OP’s husband saying that she had been treated appallingly and wouldn’t be back, and OP’s husband has taken his mother’s side.

Jake was livid that I ate that one too and told me this is my fault and I should go with him to apologize to her. I got angry too and told him why couldn’t she have just asked directly instead of going around all these circles in the first place?

He ignored me and grabbed his jacket and keys and left.

Am I really in the wrong here?

I’m pretty sure that I know from previous experience what Reddit’s going to say here, but let’s read it anyway. For the giggles.

The top comment is short and sweet – she said she didn’t want any. End of story. 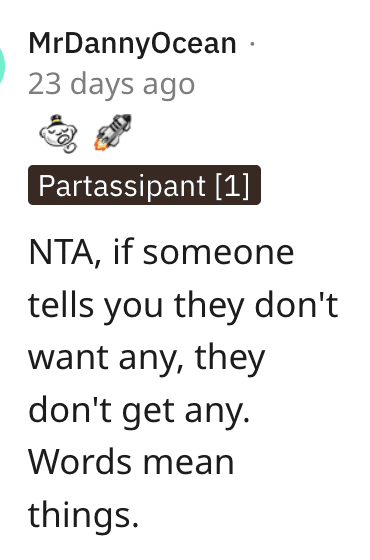 And she even said no twice and then expected there to be more. 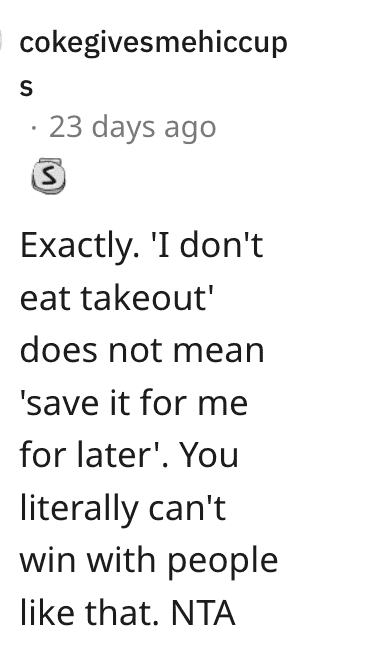 Many believe that OP’s mother-in-law was simply looking for a fight – and maybe to force her son to take her side.

Speaking of the husband, people really don’t like his lack of support for his spouse.

This commenter points out that OP was actually quite nice about the whole thing. 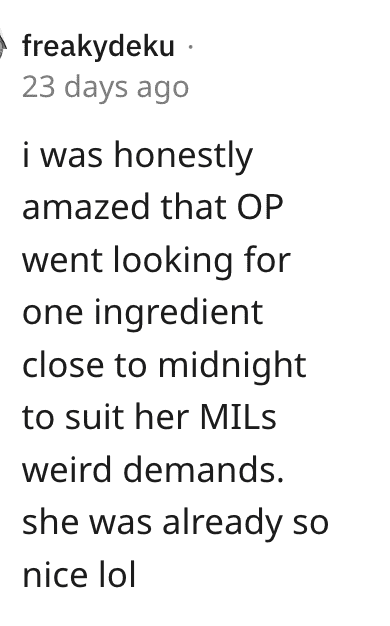 Y’all, this woman went above and beyond and this is the thanks she gets.

Isn’t it always the way.