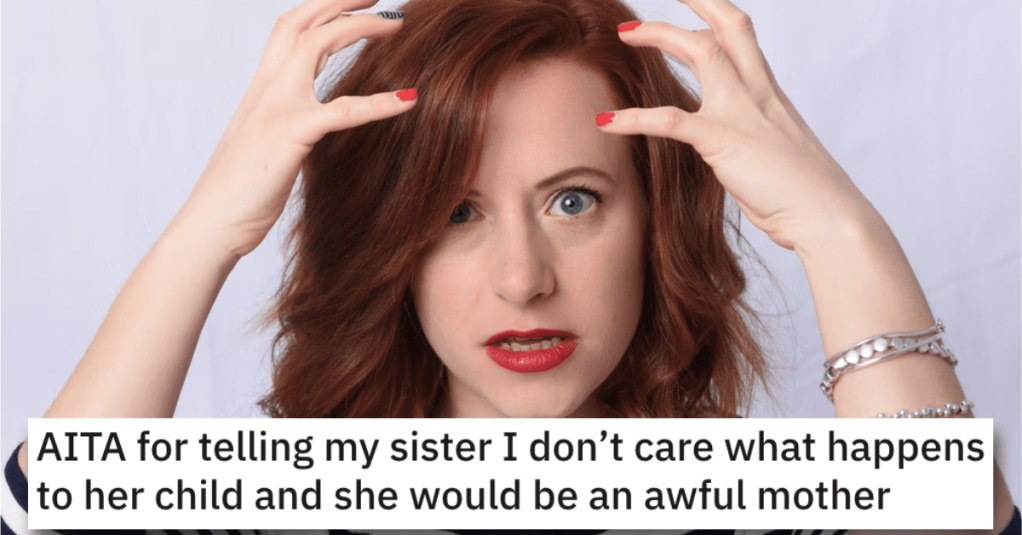 I don’t think it’s a good idea to tell anyone, no matter who they are, that they won’t be a good parent.

But you know it happens all the time…

Read on to see what happened and if this young woman was wrong for calling out her sister.

AITA for telling my sister I don’t care what happens to her child and she would be an awful mother?

“The title sounds literally awful- and i feel awful. My (17 F) sister (Veronica, 19 F) accidentally got pregnant. I think having a little niece or nephew would be nice but whatever Veronica wants to do is fine by me.

She decided to keep it and my parents are beyond ecstatic. Veronica and i aren’t close , she was barely home growing up and my parents both left for work at 6 am and got back just in time for dinner. I basically raised my little siblings ( K, 11 M) (M, 14 F )and (C, 13F) . Me and my little siblings are really close and spend most of our time together but Veronica always relied on friends.

Veronica tries her best to disturb peace in the family, causing fights with my sisters over little things like spraying too much perfume or commenting on their looks, but whenever we fight with her she threatens to abort her child as if we are going to drop to our knees and beg her not to.

My parents protect her in every fight and thinks she can do no wrong because she is “blessing them with their first grand baby”.

Over the past few weeks i’ve been working hard to buy a gift for C, just an expensive perfume she wants which was about $110 , (expensive, i know) but she was really wanting it. Not even two days into her having it her and Veronica got into a fight over god knows what, Veronica took the perfume and a few of her other belongings and threw them off the balcony.

This pi**ed me off so much , because not only did i spend so much on that but also that was C’s stuff that she valued. C was crying while M was consoling her. Veronica was staring at her with a smirk on her face as if she was proud of being a fully grown adult and destroying a barely teenager’s stuff.

I went absolutely crazy on Veronica essentially telling her to go f**k herself. She started saying “i dare u to hit me! I’ll get rid of this baby, I don’t give a f**k” i was confused as this had nothing to do with her kid and i said “ I don’t care what happens to that thing, you’d be an awful mother anyways”.

My parents came to her rescue and told me to either get over myself or move out. So i said “okay” and went to my boyfriend’s house. I’ve been getting calls and texts from my parents and Veronica telling me to come back and talk this out , also saying i’m an awful person for saying this to my poor sister. I feel bad but my boyfriend is telling me that they are treating me like s**t and he doesn’t think i should go back there unless i really want to.

This reader said that this young woman is NTA but her sister and her parents are. 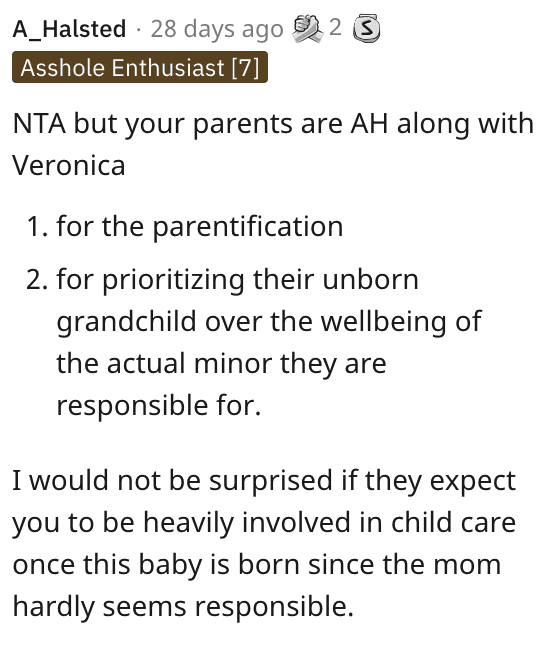 And this individual agreed and said that Veronica doesn’t sound like she’s going to grow up anytime soon. 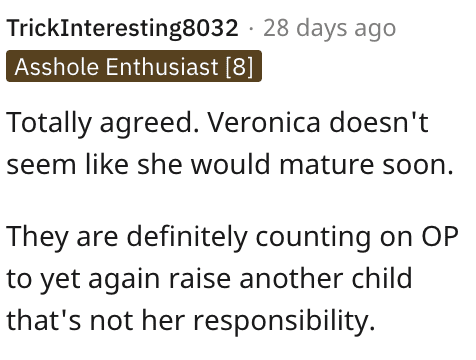 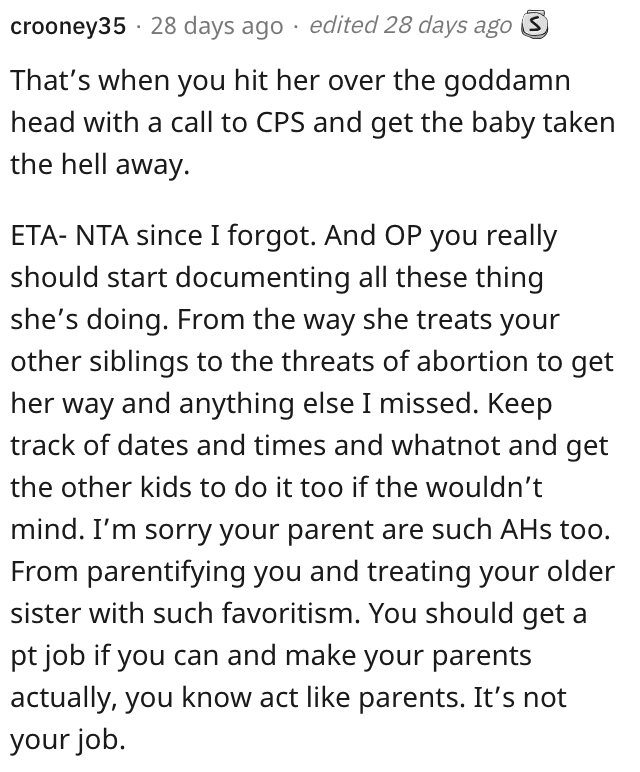