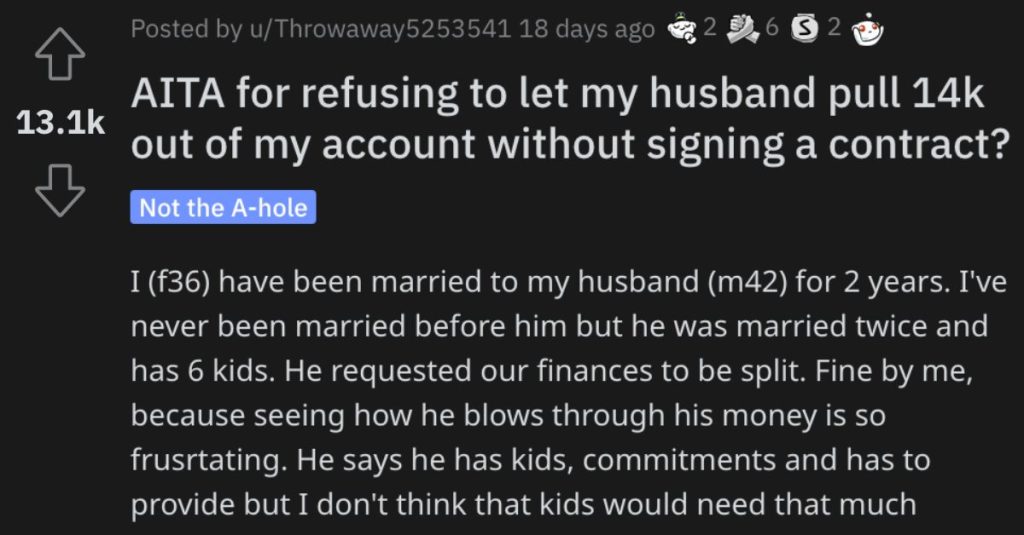 Woman Asks if She’s Wrong for Not Letting Her Husband Pull $14,000 Out of Her Account Without Signing a Contract

That’s a pretty big ask of anyone…even if it happens to be your wife.

Take a look at this story and see what exactly is going on here.

AITA for refusing to let my husband pull 14k out of my account without signing a contract?

I’ve never been married before him but he was married twice and has 6 kids. He requested our finances to be split. Fine by me, because seeing how he blows through his money is so frustrating.

He says he has kids, commitments and has to provide but I don’t think that kids would need that much money to live like the other kids. his bank account is always almost empty, Whereas mine has over 20k. We take turns paying for daily expenses and stuff.

Lately, he’s been struggling with money. He borrowed from a number of people including my own brother, about 4k from him just a week ago. he just seemed desperate for money. I asked what the deal was and he said that he needed the money for the kids which seemed fishy since kids don’t really need that much money for their expenses. the eldest is 16!!!!!.

He came and asked to borrow 14k from me, Pull it from my account and into his. I tried asking him what he needed the money for but he said it was none of my business, then insisted that he’ll return it asap. I said okay, but under the condition, that he sign a contract stating he’ll return the money in full.

He acted all shocked and offended then went on about how I don’t trust him and his word. I told him that’s all I got and this was my one and only condition. He kept ranting about how I’m refusing to help and making the situation more difficult for him instead of co-operating.

I insisted on a contract to be signed before he even pulls a penny and this morning when I told him this one more time, he blew up and said that we’re family and that I should be ashamed for involving courts and lawyers between family. he left the house and was so upset he hasn’t responded to any of my calls yet.

AITA for standing my ground with this condition?”

One individual said she’s NTA and that this sounds like the behavior of an addict. 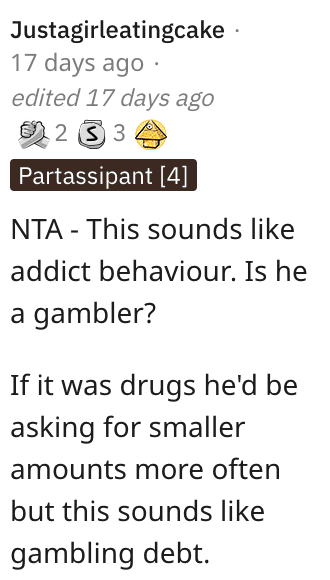 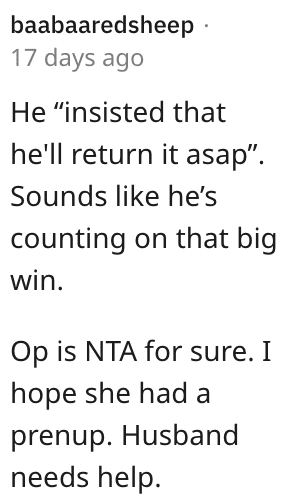 And this reader also said that they have no doubt that this has to do with a gambling debt.