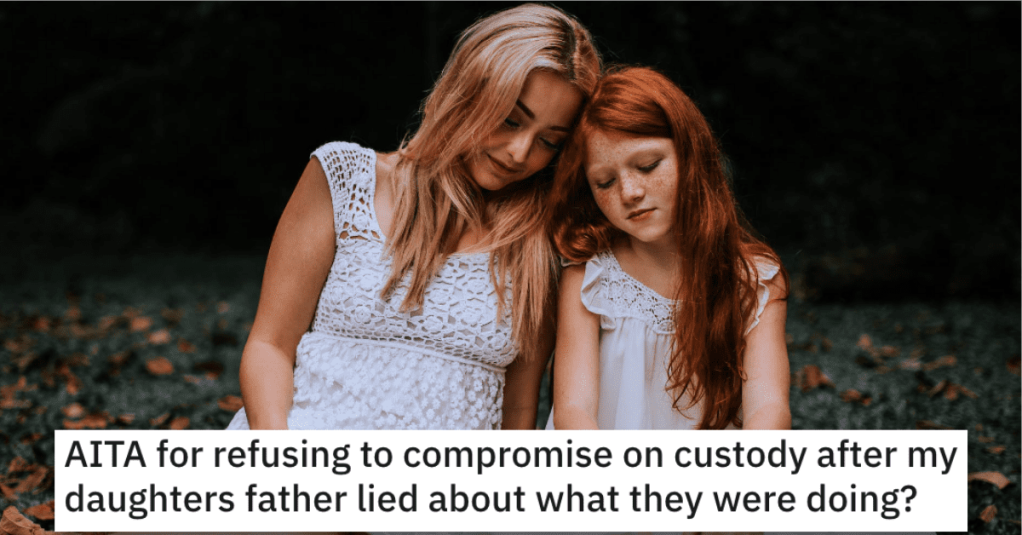 When it comes to parents and their custody fights over kids, things can get ugly in a hurry.

And a woman asked the fine folks on Reddit’s “Am I the A**hole?” page if she’s acting like a jerk because she won’t compromise with her daughter’s dad.

AITA for refusing to compromise on custody after my daughter’s father lied about what they were doing?

“I(32f) co parent my 13 year old, Lily, with her father. We are generally flexible with days and neither of us have a problem with the other.

A few weeks ago he texted me “could I pick up Lily Friday September x instead of y and drop her off a instead of b.” When I asked him why he said his brother in law passed away and his funeral was Saturday and he wanted to leave Friday. It was in a city several hours away.

I agreed to this, I wasn’t happy with her missing school but I compromised.

A few days ago a friend of mine sent me pictures from his social media of him with Lily at a ball game from that Friday in the city where his BIL’s funeral was. He never told me anything about that.

I texted him and asked what was up with that and why he had lied and he said that he hadn’t lied, it’d been a “lucky coincidence” “their” favorite team was playing in that city and he figured they might as well go to a game to see some of her favorite players.

I asked if she had homework she should be doing and he said she had “plenty of other time” to do it and this was “important to him”. I am very big on the importance of Lily doing well in school so this was upsetting to me that he put a child’s game and something he wanted to do over her schoolwork.

I don’t even think she likes the team for any reason other than to connect with her father and I think this was mostly for him because I see all the “nostalgia” stuff he posts on social media about the team.

I told him he shouldn’t have left that out of the plan he gave me and that I wasn’t changing custody anymore for his mothers birthday, and that he could pick her up and then drop her off a few hours later but she wasn’t staying overnight and I wanted those hours back later .

Now he’s incredibly upset at me and called me an a**hole for “overreacting”. I just want Lily to understand an education is important and to be prioritized and be surrounded by people that understand that.

This reader said she’s an a**hole and asked why she’s trying to punish her daughter’s father.

And this individual said this kind of behavior is why this girl will ultimately pick her dad. 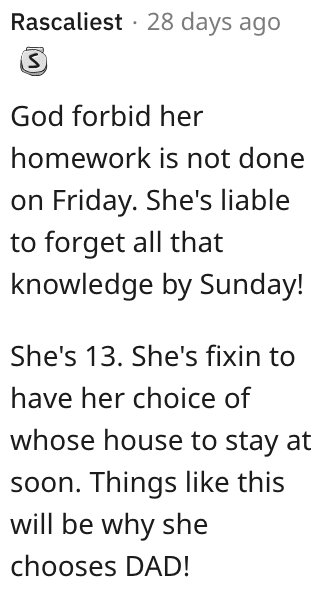 And another Reddit user said she’s an a**hole and this would have been a good memory for dad and daughter. 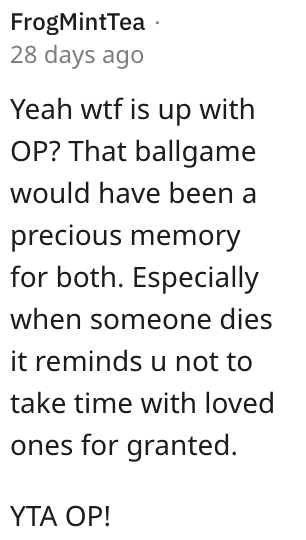