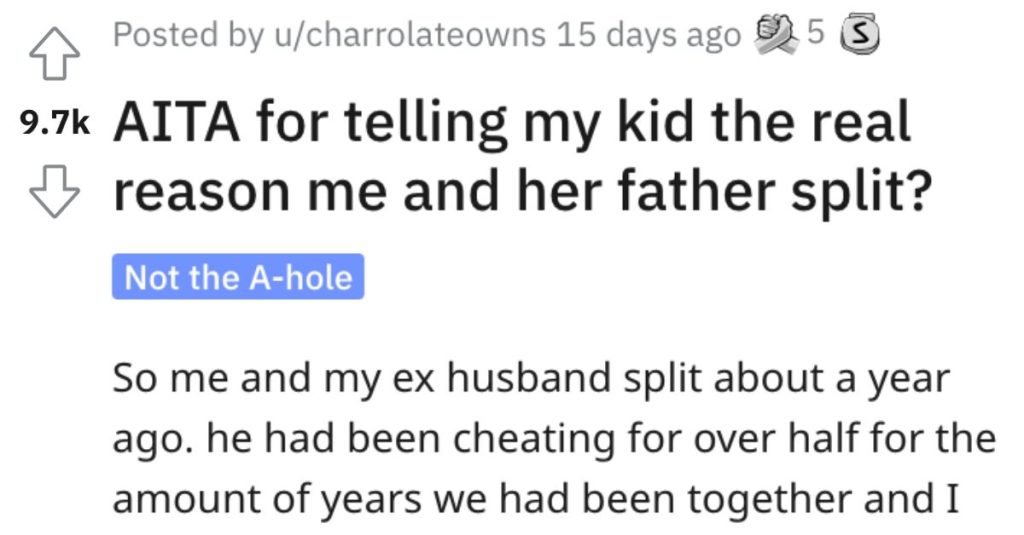 Sometimes the truth comes out because it’s been hidden for so long and tensions and feelings build up and the dam breaks.

And sometimes the truth needs to be told to kids about their own parents, no matter how uncomfortable the situation.

But did this mom go too far when she told her teenage daughter the truth about what happened with her father?

Check out her story below and let us know what you think in the comments.

AITA for telling my kid the real reason me and her father split?

“So me and my ex husband split about a year ago. He had been cheating for over half for the amount of years we had been together and I caught him in bed with a man and a woman, he was bis**ual I divorced him soon after despite all the pleads and we went out separate ways.

I’ve tried to briefly explain without outing him to my daughter (15f) why we are splitting, my intention was never to turn her away from her dad or make her h**e him. We had originally stated that we would try to keep this as brief and shelter our daughter from this harsh time as much as possible.

Lately she has been very h**eful and disrespectful towards me and for the longest I couldn’t understand why, Until she had gotten into a fit and told me that I ruined her life and if I just kept my legs closed she would have still had her family back together,

This shocked me, at first I was p**sed but then I was confused as to where she got this information from.

I had asked her before and she said that she wasn’t going to talk to me when I was the one who ruined her life.

I called her father and asked him if he knew anything about this and if he had told anyone I was the one who f**ked up but he dismissed everything and said he had no clue where she had gotten that information from.

Now I was really confused and back to angry that she said this to me, but I chose to wait until I knew what was going on I tried talking to her multiple times but she continued to shut me down and say that I ruined her life, I’m a terrible mom, I chose s** above her family, and I’m the only one to blame for her not having a mom and dad together.

I reached out to all family and friends to see if they had said anything that would lead to this as well.

Now I’m not proud if this but I saw a message come up on my daughters phone and I peaked at it, the message read, “I know sweetie just three more days” and it was from her dad. I opened the phone to see tons of messages of them two going back and forth with her telling him that she was sick of being here, she didn’t want to be near me after I did that, she couldn’t believe I would cheat, she’s disgusted by Me, and her father just agreed and consoled her.

I’d asked him multiple times if he knew anything about her behavior and he said no, he put the blame on me for no reason.

I called him once again after that, and messaged him about it when he didn’t respond and got left on read.

I sat my daughter down and told her that I know she’s angry at me, and I tried to shelter her from this and keep her ad far away from this as possible, but I won’t be held accountable for actions that weren’t mine. I left any and all questions that i couldn’t say without his perspective out.

She was shocked and apologized for her behavior to me. This wasn’t some petty revenge to get back at him, but I cant have my relationship with hers ruined either. I’m now getting blasted by all of my family and his for doing this so AITA?”

One person said she’s NTA and she should keep the receipts, so to speak. 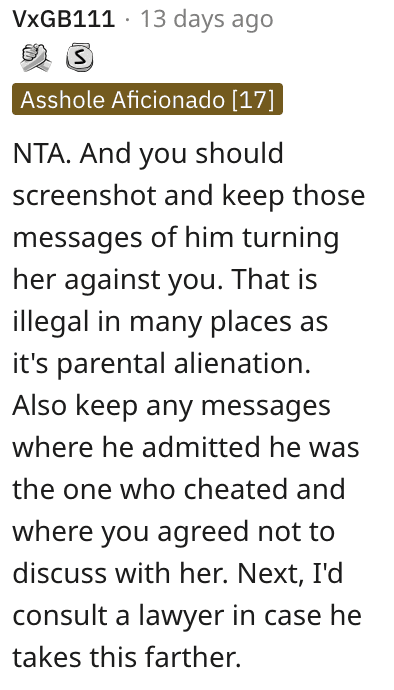 Another Reddit user said she’s NTA and they don’t know why kids need to be kept in the dark about this kind of stuff. 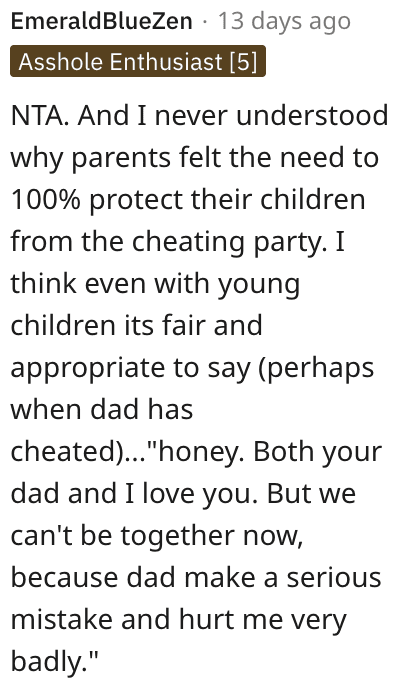 Another individual agreed and said that the kid deserves to know the truth. 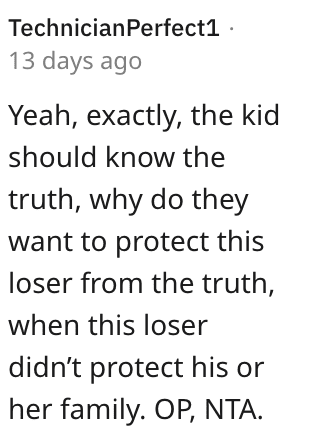