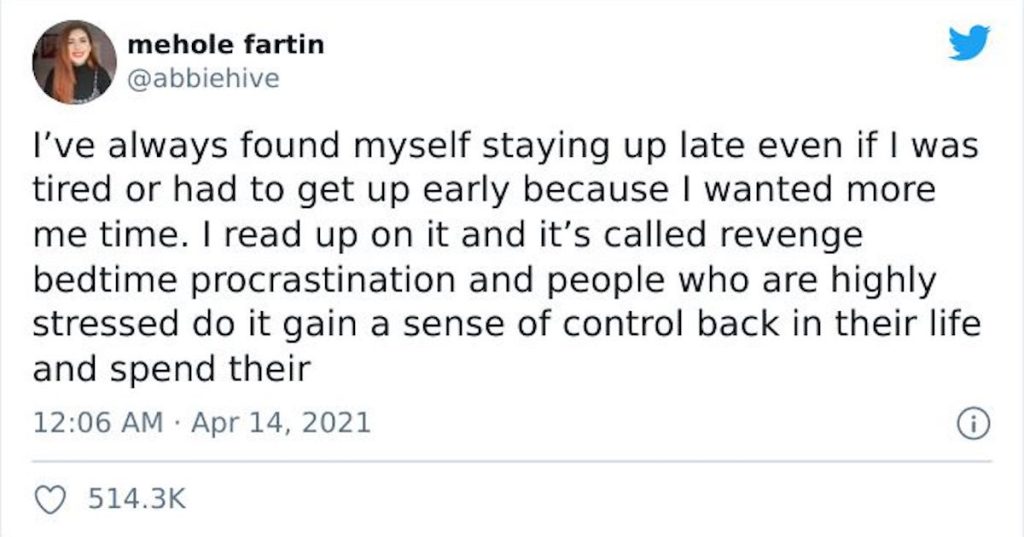 We all do it: stay up later than we know we should, even though we’re tired.

When we were kids, it was called “being kids.”

No one wants to be told when to go to bed, and to mention the healthy dose of FOMO that kids seem to have about what goes on after they’re in bed.

But even as adults, when it’s US trying to tell ourselves that we should go to bed, sometimes it’s hard to make us do that.

An Irish woman on Twitter recently went viral for a post about this behavior, describing it as “revenge bedtime procrastination,” and the rest of us have never identified with something more. 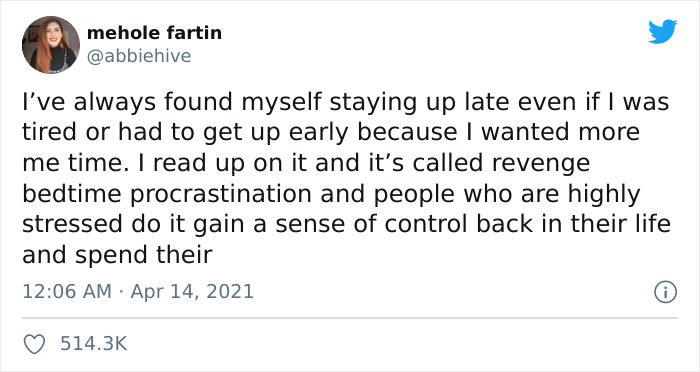 Mehole may have been referring to an article published by the Sleep Foundation, which describes revenge bedtime procrastination as:

“…the decision to sacrifice sleep for leisure time that is driven by a daily schedule lacking in free time.

For people in high-stress jobs that take up the bulk of their day, revenge bedtime procrastination is a way to find a few hours of entertainment even though it results in insufficient sleep.

Tweeted at 1 AM Dublin time, Mehole received QUITE the response.

We are all guilty of this, it seems.

I know that I do it, particularly on days when I’ve had about 12 hours of meetings, the last one ending half an hour before my usual “bedtime.”

If I try to go straight to bed, I lie awake. I need time to wind down.

And also, i deserve it!

And because we love infographics, one helpful follower provided this handy guide to the phenomenon:

People of all stripes, the world over, agreed.

Exactly. I do my best work, and best decompressing, late at night when the rest of the world around me is still and their energy isn’t messing with my vibe. It’s honestly the only time I can “almost” relax.

Which means that pandemic lockdowns, where loved ones are around ALL. THE. TIME. have only exacerbated the behavior.

This is 100% me. It’s the only time my family isn’t asking me questions and I can just sit, alone, and do whatever (usually just watch a show or go on my phone) undisturbed.

The 4 Day Week Campaign joined in on the conversation, stating that this is just one more example of why there should be a 4-Day Work Week, which is a nice idea as long as it reduces the work week from 40 hours.

This is exactly why we campaign for a 32hr #4DayWeek (with no reduction in pay).

We should be able to have more control over our time to spend it doing the things we want with the people we love.

Just as we moved from a 6 to a 5 day week, so we should move to a 4DayWeek today.

All in all, it seems like everyone is guilty of this sometimes.

I think that bedtime postponement tactics are hardwired into the human psyche, but it sure does speak volumes about how overtaxed we all are, too.

Especially since when we stay up just to do nothing.

Are you as guilty as the rest of us? Tell us about it in the comments.