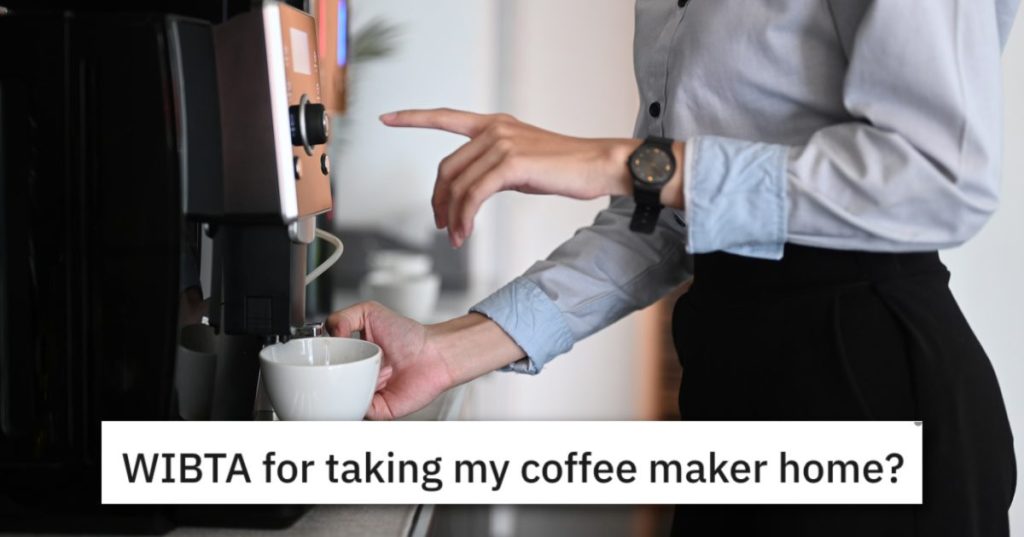 Would Taking The Coffee Maker You Paid For When Leaving A Job Make You A Monster?

It goes without saying that in most workplaces, coffee is life and the office could not function without it.

And what if that person is moving on to a new job?

That’s the situation that OP found himself in after being offered – and accepting – a better job closer to home.

I just found a new job, closer to home for more pay, and put in my notice.

The people here are acting like they’ll miss me but it’s such a great opportunity that most of them are understanding and kind about it.

The issue I have is…I paid for nearly everything in our coffee break area out of my own pocket.

The keurig, all the coffee pods, sugar, creamer…I paid for it it’s mine.

He paid for all of the coffee stuff at work and wants to take it with him, but when he joked about it, his officemates made it seem as if he was being super selfish if he went that direction.

However it is the only working coffee pot in the building, and when joked to my store manager about, “What are you going to do without your morning coffee?”

Now my current coworkers are saying, “are you really going to steal the coffee pot when you leave?”

It’s not stealing, it’s mine. And it’s not cheap to replace. So internet strangers…WIBTA for taking home my Keurig and coffees?

Is Reddit on his side? Or is coffee something you just don’t take from people with short notice?

These two comments suggest it’s kind of a “them” problem at this point, right? 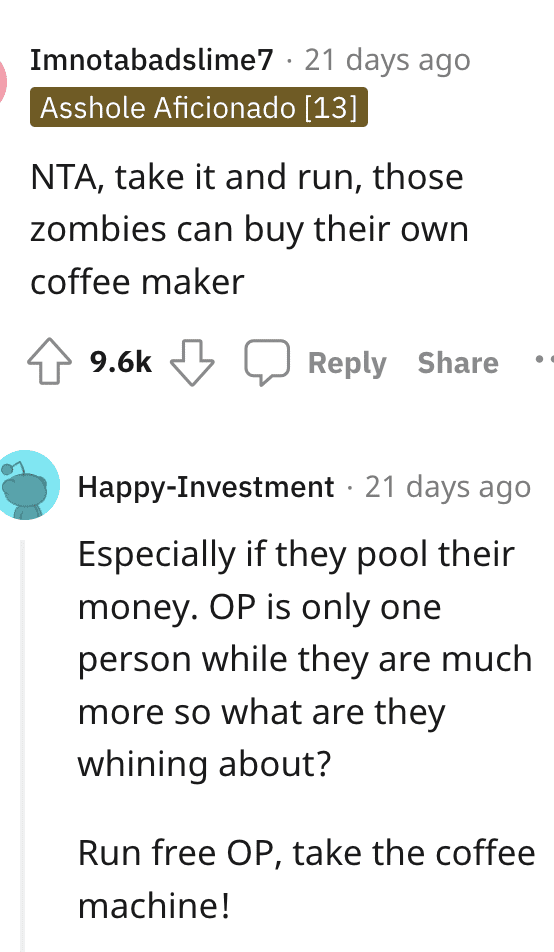 While this person suggested a reasonable alternative. 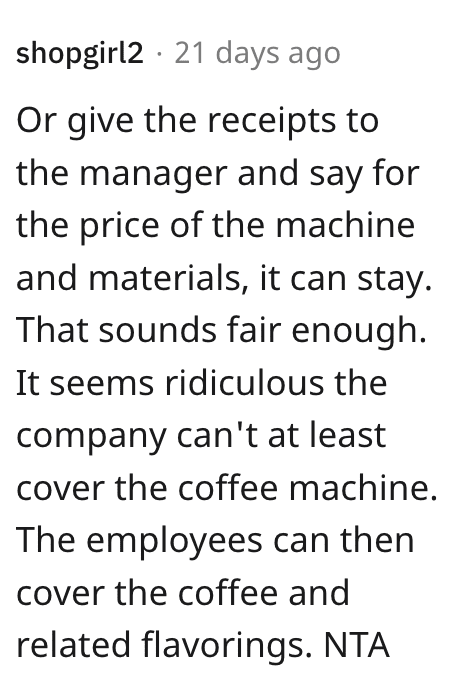 This is a reminder to always keep your receipts. 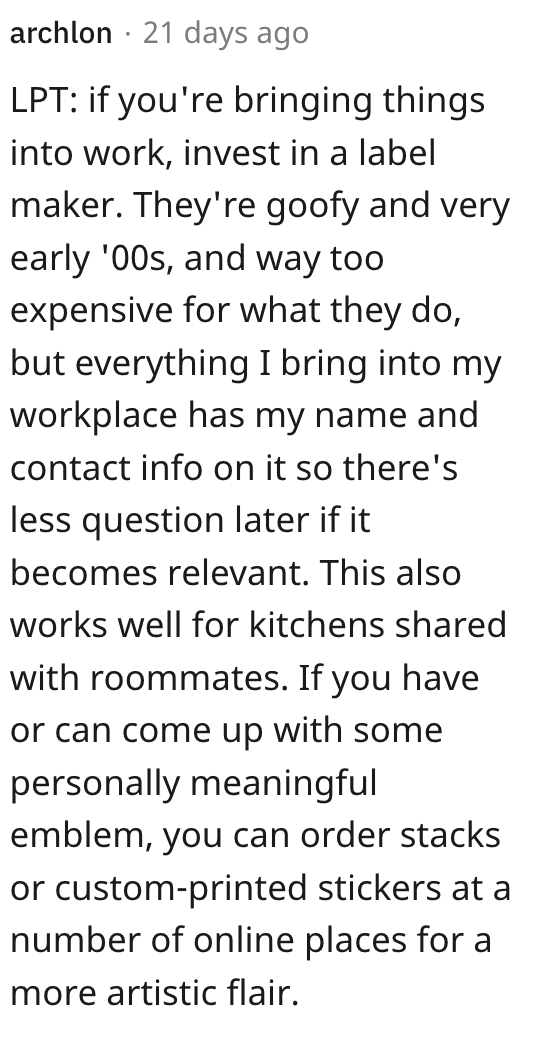 You gotta watch your own back, because nobody else is gonna do it! 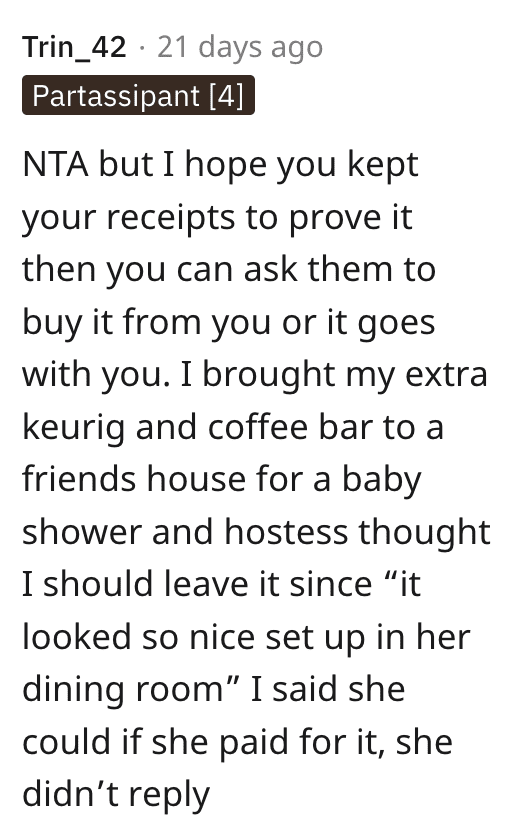 We hope he’s learned from his mistake in the meantime! 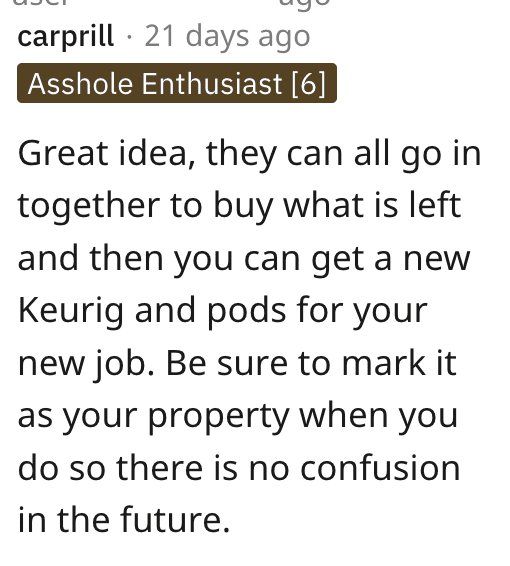 This all turned out ok in the end, as his manager gave him the company credit card to buy himself a new Keurig!

Edit: the FM (manager I made the joke to) got her coffee this morning and said Snarky Coworker had gone to the SM, and gave me the credit card and company car to go buy a new keurig.

Said keep the new one and the office can have the old one.

Currently walking around Walmart shopping on the clock.

I say this is definitely an “all’s well that ends well” situation, how about you?

Tell us in the comments whether you would have taken your coffee maker or considered it a donation to your old coworkers!