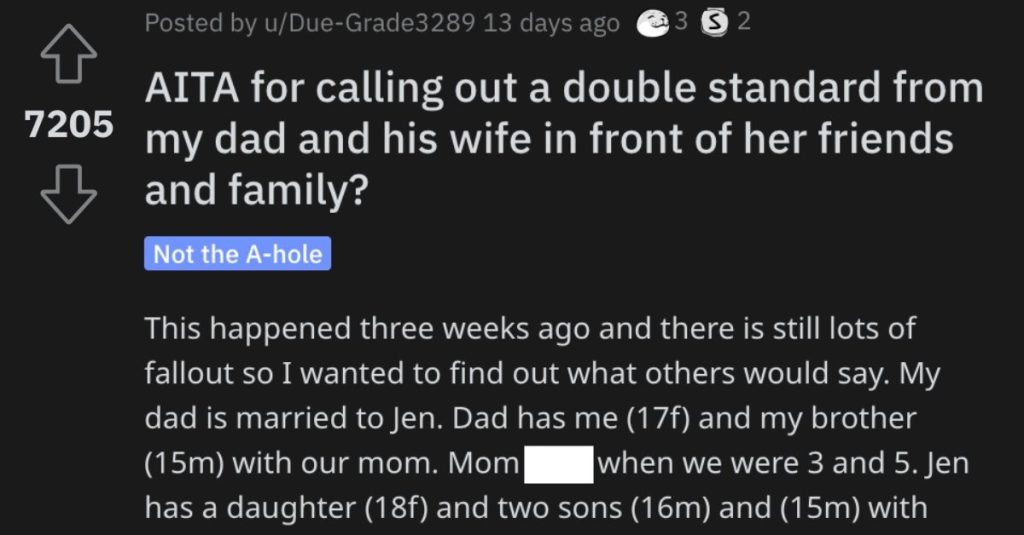 Daughter Calls Out Her Dad and His Wife for a Double Standard. Was She Wrong?

Well if they don’t, then they should…

Take a look at this story and see if you think this teenager is wrong for calling out her father and his wife.

We’ll see you in the comments!

AITA for calling out a double standard from my dad and his wife in front of her friends and family?

“This happened three weeks ago and there is still lots of fallout so I wanted to find out what others would say.

Jen and my dad married when I was 11. From day one she approached me and my brother about being our parent, about how she would call us her kids, how she’d love us to call her mom and stuff. I never called her mom. My brother did once but felt bad about it and stopped.

I have asked Jen not to call herself my mom or me her daughter. She told me it wasn’t my decision. Dad told me it was the best thing for us. Jen’s kids do not call my dad ‘dad’, my dad does not call them his kids, he never introduces them in that way and neither does Jen. But dad will say ‘mom’ when referring to Jen. It bothers me. They always said Jen’s kids have their dad living and neither he nor they would like my dad to be known as anything but their stepfather.

I h**e the double standard because my mom is no less my mom than Jen’s kids’ dad is their dad. Only my mom died so she can’t complain. But even their feelings are supposedly right while mine are wrong. My dad isn’t even grandpa to Jens’ grandchild. The baby is going to be told to call my dad by his first name and Jen’s daughter corrects anyone who calls him grandpa or him and Jen the grandparents.

So like I said three weeks ago Jen had family and friends around and she was celebrating being a grandma and someone there was new and she told the person she was my mom. I stepped in and corrected her. She told me she was my mom since she was raising me and my brother.

I went off on her and my dad about the double standard. Saying my mom wasn’t less important than her ex because she was dad and that my feelings should matter just as much as her kids feelings do. I told her I NEVER accepted her as my mom and I never wanted to be known as her daughter.

They are so pi**ed I went off in front of people. Well, they’re pi**ed I feel this way at all, but they’re not happy I did it so publicly.

One person said that that young woman is NTA. 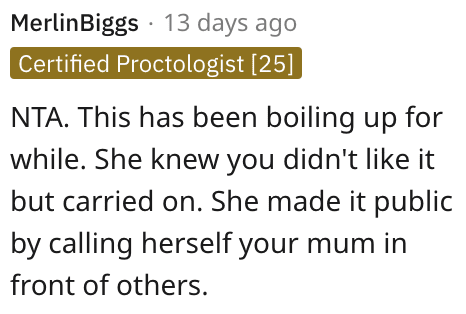 And another person agreed and said that the dad and stepmom are to blame here. 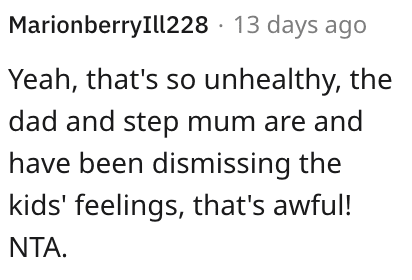 And this individual had an interesting idea about how to deal with this situation. 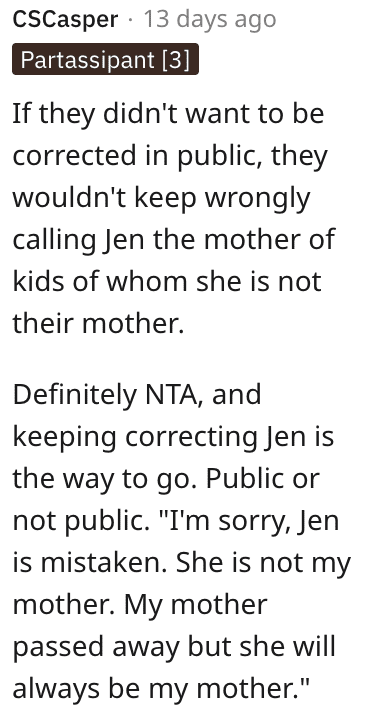