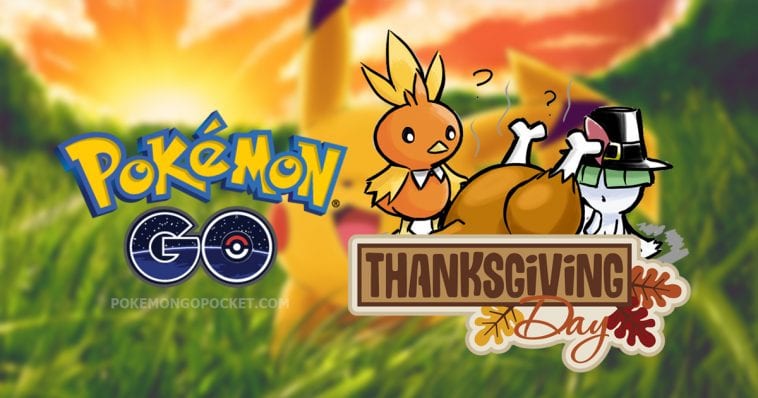 Is A Thanksgiving Pokémon GO Event Happening? 6 Reasons Point To One Answer.

With Thanksgiving right around the corner, there’s been A TON of speculation about a possible event from pretty weak sources, but not a peep from Niantic about an event.

This is likely for several reasons.

1. Too Many Events In A Short Period Of Time

Between the Halloween event, the Daily Bonuses roll out, and a region-specific Lapras event, they’ve already had three events in less than a month.

Having one more major event that’s available to all trainers could make events seem trivial. Waiting until a certain time during the holidays will give Niantic a chance to really plan out what a great holiday event could be.

Halloween is a time when people are out walking anyway. Also, the creepy or Halloween-related Pokémon were a great touch. How many people found out about Cubone’s back story because of this event? And the whole extra candy thing was genius. Of course we’d be getting more candy!

On the other hand, Thanksgiving is a time to spend with family. You’re not really out walking around. And what would the Thanksgiving Pokémon be that would spawn more? Birds? Of course this could be a time to launch Legendaries, but what do most people do on Thanksgiving?

Is that an association you’d want with your game? I know I wouldn’t.

There’s been some speculation as to what types of Pokémon would be released in a Thanksgiving period, and none of them are very interesting, apart from maybe Rapidash.

However, if Niantic does launch a holiday event…imagine getting increased spawns for Pokémon that have Ice Type Moves. That would mean Lapras, Cloyster, Shellder, Seel, Dewgong, Hitmonchan, Poliwrath, Jynx, Seaking, Golduck, Slowbro, Wartortle, Blastoise, Seadra, and Tentacruel could all have increased spawn rates.

That could be game-changing. Why? Well, remember that Ice Type Moves are really good against Dragon Pokémon. Who’s one of the toughest gym defenders? Dragonite. An event that focused on stocking up on a lot of Ice Types would reinforce the fact that a Dewgong with half the CP of a Dragonite can take one of those down with the right moveset.

That’s right. Niantic’s first game had events just like Pokémon GO, and Thanksgiving was never part of that strategy.

If that’s the precedent, it’s likely because of the next reason…

Since July, I can guarantee you that everybody at Niantic is overworked. I’m sure they’re incredibly happy with the success of the game, but as anybody who has ever worked at a startup can attest to, burnout becomes an issue.

Additionally, in the past month alone they’ve had to plan and execute three events. And while it’s true that most of us can’t attend the Lapras event, it’s still something that Niantic had to organize.

They need rest. And they deserve it.

6. Because Sometimes You Should Put Your Damn Phone Down

Am I still going to train every day so I can get the Daily Bonuses? Of course. But sometimes you need to put down your phone and be thankful for the people in your life.

If Niantic doesn’t give people incentives to play the game, that’ll make sure trainers focus on the truly important things in their lives. Pokémon GO can wait. Fighting with your uncle over Donald Trump being elected can’t. 😉

But what do you think? Any signs that point to a Thanksgiving event that I’m not seeing? Let me know in the comments!